The Red Cross says about 20 families have been displaced from their Indianapolis homes after heavy rains inundated parts of Indiana.

The organization said in a news release that it’s working with fire officials to provide emergency housing for 50 to 60 residents whose homes were affected by flooding Tuesday. The Indianapolis Star reports about 15 people on the city’s west side were pulled from their homes, and evacuees were taken to a fire station. 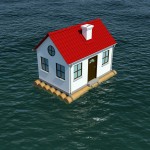 WLFI-TV reports residents in Rensselaer in Jasper County continue to clean up nearly three weeks after the worst flood in decades receded.