Independent insurance agents often rate a carrier with great field representatives higher than others — sometimes elevating them to their “Top 3” carriers. While the performance of insurance company field representatives doesn’t rise to the top of independent agents’ minds along with claims service or real-time technology, agents are more likely to say their top carriers’ field reps are “far above average” than other carrier attributes, including competitive pricing, agency compensation or marketing support.

These are some of the emerging findings in the forthcoming survey “2010 Survey of Agent-Carrier Relationships,” which polled about 1,500 agencies in nearly every state and asked questions about various aspects of their relationships with the carriers they represent. The survey drills down into the specifics of issues such as claims service quality, field representative performance and underwriting appetite.

Some carrier attributes, such as financial strength and claims service, are extremely important to nearly all agents. Field rep performance is very important to some agents, less so to others. “Where a carrier has truly superior field reps, they can drive carrier choice,” said Kevin Jenné, lead researcher for this study and research director for Channel Harvest, which conducted the survey. “However, many agents put up with unhelpful reps, while choosing the carrier for other, more important reasons.” 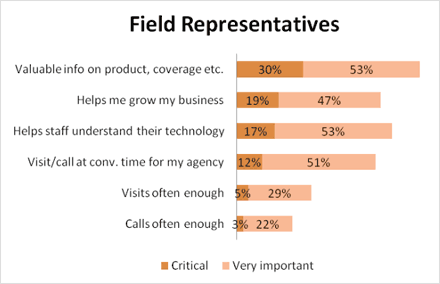 For example, 11% of agency respondents said that even their top carriers had “below average” field reps, which was the largest “below average” rating among all factors measured. By contrast, only 2% to 3% of agents said their “go-to” carrier was below average on financial strength, claims service quality or underwriting expertise.

Agents said their top carrier had “far above average” field reps 29% of the time, fourth highest of 10 factors, indicating that the derived importance of superior field reps is higher than most other measured factors.

Among six different factors specifically related to field rep performance, agency respondents most want valuable information on their company’s products and coverage. They also value field reps who help them drive more business. As one agent described a superior field rep, “He is not a PR man, but knows the business and helps us to quote and write business.” Another carrier’s field reps received high marks because they will “spend time teaching agents how to use and sell their products.”

Agency respondents praised carriers for sending field reps with underwriting authority; these reps are seen as having authority and influence to get business done. As one respondent put it, “Field representatives should have some level of underwriting approval. Just having a rep come out and wave flyers around or tell us what we are not producing is counter-productive. If your rep doesn’t have the authority to solve problems while they are standing in my office, don’t bother to send them!”

Agents appreciate field reps who are in frequent contact, but don’t waste their time, and are quickly accessible when they are needed. One agent said he appreciates one carrier’s field reps because “they don’t visit too often. They understand our employees need to be at their desks placing the business.” Half of agents—51%—said field reps should call once a month, while 56% said they should visit once per quarter.

According to comic Woody Allen, 80% of success is just showing up. Agents greatly appreciate carriers who send field reps, and respondents expressed annoyance at those who don’t. One agent listed a carrier as superior because “he is the only one that comes consistently.” Another praised a carrier because “I have seen more of this field rep in the last year than all of others combined and the info given and exchanged has been helpful.”

The survey was sponsored by Insurance Journal and conducted by Channel Harvest—a partnership between Aartrijk and Campbell Communications. Insurance Journal will report more selected findings of the survey, such as independent agent attitudes on industry issues, in subsequent articles.

The survey instrument covered more than 100 separate questions. A total of 1,498 agents responded to the survey and passed validation criteria. For most general questions in the survey, the number of responses yielded a margin of error of 3% at a 95% confidence level. Quantitative survey results are presented in a variety of formats, including importance rankings of specific carrier attributes, industry issues, and open-ended agency comments about what breaks superior carriers out from the pack.

The study “2010 Survey of Agent-Carrier Relationships,” is the third in a series tracking agents’ views on issues in the insurance marketplace. For more information on obtaining the survey report, contact Peter van Aartrijk at peter@Aartrijk.com.