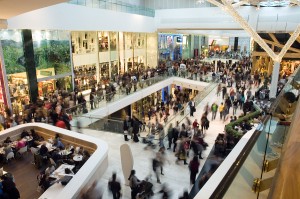 The rush is the risk on Black Friday and Cyber Monday in the eyes of a retail insurance and risk expert who previously worked in retail for 22 years.

Kelly Brown of Zurich North America doesn’t go so far as to describe the holiday time as a zombie apocalypse, but he and others in the insurance industry with retailers for clients have growing fears of ravenous gift-seeking crowds on Black Friday, the day after Thanksgiving, seeking coveted items at a time when there appear to be questions about retailers’ inventory.

To start with, supply chain issues in exporting countries could lead to fewer items being available. Also, retailers themselves may be cutting back on excess supply. If not properly managed, the situation could invite more of that holiday madness.

“If the items advertised are not available, it definitely could be a problem,” Brown said.

Several indicators may point to reduced supply over the holidays, most notably retailers cutting back on their stock to remain conservative and in preparation for a holiday shopping season that’s just expected to be average.

The twin ports of Los Angeles in Long Beach, where the lion’s share of goods headed to western U.S. retailers and distributors arrive from foreign countries, recently reported disappointed cargo volumes for October, when the number of containers coming into the third busiest port complex in the nation dropped an estimated 20 percent year-over-year. October is typically a strong month for cargo volume due to retailers stocking up for the holidays.

Despite signs that consumer demand may be rebounding across the nation, retailers appear to have taken a cautious approach for the upcoming holiday season, according to retail industry watchers at the port.

Add to that a consumer demand that’s at least expected to be average, so there will be no shortage of shoppers. Holiday retail sales for 2011 are expected to increase 2.8 percent to $465.6 billion, according to the National Retail Federation.

“Retailers are optimistic that a combination of strong promotions and lean inventory levels will help them address consumer caution this holiday season,” NRF president and CEO Matthew Shay said in a statement. “While businesses remain concerned over the viability of the economic recovery, there is no doubt that the retail industry is in a better position this year to handle consumer uncertainty than it was in 2008 and 2009.”

All this speaks volumes for managing the risks of retail customers, and as he does each year, Brown is advising his firm’s clients to prepare for the worst.

“Retailers could offer rain checks, or communicate ahead of time that the stock is not available,” he said.

Of particular concern are any “hot” items out there for which the shoppers will have a particular thirst.

“There’s a lot of anxiety around trying to get to those items,” he said, noting that among his advice is for retailers to count the number of people in lines waiting to get in to stories and have a count ready of how many of those items are on hand.

He’s also advising retailers to issue tickets to people in lines for certain items, and have the lines organized so as “to control that flow of people. That way, once you do unlock the doors, you have an organized entry into the store.”

He added, “Create as much order as possible.”

Much of the concern over Black Friday safety harkens back to 2008, when a worker was trampled to death while a mob of shoppers rushed through the doors of a large store to take advantage of an after-Thanksgiving Day sales event.

The fact sheet provides employers with recommended crowd management plans, including having trained security personnel or police officers onsite, setting up barricades or rope lines well in advance, ensuring barricades are set up so lines do not start right at the entrance of the store, having emergency procedures in place and explaining approach and entrance procedures to the arriving public, having good signage describing entrance locations and opening times, and preparing an emergency plan that addresses potential dangers facing workers, including overcrowding, crowd crushing, being struck by the crowd, violent acts and fire.

OSHA is also recommending stopping additional customers from entering a store when it reaches its maximum occupancy level and assuring that all exit doors are accessible and clear.

While Black Friday is one of the biggest days for brick-and-mortar stores, Cyber Monday is a major Internet shopping day.

There will be more consumers than ever this year shopping on the web for the holidays, spending a greater share of their gift budget there than they have in previous years, according to eMarketer.

“Ecommerce has been insulated from the lingering effects of the recession and has even benefitted from price-conscious consumers’ reliance on the internet to save money,” said Jeffrey Grau, principal analyst for eMarketer.

Beside the boost from price-conscious consumers, online holiday sales will also get a boost from smartphone and tablet users, according to eMarketer.

Another beneficiary of the down economy may be the cybercriminal.

“Sorry to say that if we’re talking about Cyber Monday there’s not a lot difference; it’s as bad as it was last year, maybe a little bit worse,” said Larry Collins, director of e-solutions group in the risk engineering division for Zurich North America.

This year may be worse thanks to the economy. More scammers are desperate for money, more people are in need and more people and companies have let their security software lapse, placing it low in the list of priorities when cash is tight, Collins said.

Cyber criminals are onto this lapse, he added.

“What ends up happening is a steady ratcheting it up in the volume off malware floating around the internet,” he said.

So what scams are going on out there this year? “Some of them are variation on existing schemes,” he said. “There’s the usual ‘I’m a foreign person, please send me money,’ as well as charity scams. It’s what we see at this time of the year more than any other—there’s a lot more of that kind of thing going on.”