Here is another sign that American International Group executives may be feeling bullish about the company’s future prospects — CEO Robert Benmosche said this week that Chartis may readopt the AIG brand name in coming years, as the bailed-out insurer continues to repay the government while improving its finances and the AIG brand. 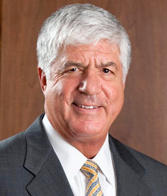 According to a report from Bloomberg, Benmosche said “We are considering being just AIG, being proud of what we’ve accomplished.” He made the comment this past Monday at a gala dinner at New York’s Korea Society, where he was the keynote speaker.

He noted that when he first arrived at the company, the mood back then was much more pessimistic. “When I got to AIG, they said AIG is gone, it’s finished, the brand will never come back,” Benmosche recalled, according to the report.

Currently, the government’s stake in AIG is at around 60 percent, down from 91 percent a little more than a year ago. Early last month, the insurer reported $3.21 billion profit for its 2012 first quarter.