The National Research Council study, which also examined the risk of earthquakes associated with tapping geothermal energy and carbon capture and storage, found that the total balance of fluid injected or removed underground was the biggest factor in causing earthquakes related to energy development. 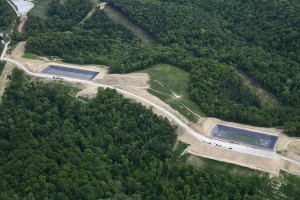 “Although induced seismic events associated with these energy technologies have not resulted in loss of life or significant damage in the United States, some effects have been felt by local residents and have raised concern about additional seismic activity,” the council said.

Researchers have known since the 1920s that injecting or withdrawing fluids from the ground could cause earthquakes, the report said, but the issue has come to the fore in recent years as states such as Arkansas, Ohio and Texas experienced small tremors associated with waste water disposal from oil and gas drilling.

Advances in hydraulic fracturing, or fracking, have dramatically increased U.S. oil and gas production from shale formations, but critics have charged that the drilling activity is polluting the water and air. Opponents of fracking have also raised concerns about possible earthquakes.

The council’s report said fracking does not pose a high risk for seismic events, citing only one 2.3 magnitude earthquake in Blackpool, England that has been officially linked to fracking for shale gas.

“It’s refreshing to know that yet another scientific inquiry has confirmed what all of us who were interested in facts already knew: there is no legitimate reason to believe hydraulic fracturing will cause earthquakes,” said Steve Everley, of Energy In Depth, an industry campaign backing shale gas production.

While waste water disposal wells pose more seismic risks, the report said cases of these wells causing earthquakes have been rare and typically less than 5.0 in magnitude.

“Although the number of felt induced seismic events relative to the tens of thousands of produced water injection wells is small, the events themselves can cause considerable public concern,” the report said.

Kevin Book, an analyst with Clearview Energy Partners, said in a research note the study’s findings on waste water wells may lead local regulators to require geologic surveys ahead of disposal well construction. This could add to costs for well operators.

Requested by Senator Jeff Bingaman, the Democrat in charge of the Senate energy committee, the report said more research is needed to better quantify the risks associated with energy production and called for development of best practices to help prevent or mitigate seismic events.

The Senate energy committee is scheduled to hold a hearing on examining the link between earthquakes and energy technology on Tuesday.