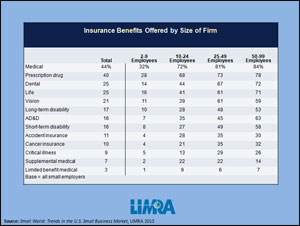 Only 47 percent of small businesses (2-99 employees) in the United States offer benefits to their employees, the lowest level in two decades of research by the life insurance industry research organization LIMRA.

According to the U.S. Census Bureau, 98 percent of businesses in the U.S. have fewer than 100 employees, accounting for approximately 35 percent of the U.S. workforce.

“The recession has had an impact on smaller employers’ ability to offer benefits, particularly those with fewer than 10 employees,” said Kim Landry, research analyst, LIMRA Product Research. “The weak economy caused a lot of small firms to close, while the new firms cropping up to replace them are less likely to offer benefits. Many small businesses are also hesitant to add new benefits until the economy improves.”

One quarter of small businesses are female-owned, according to the LIMRA study. These firms tend to be smaller, produce lower revenue than male-owned firms, and are less likely to offer insurance benefits (37 percent vs. 50 percent of male-owned small businesses).

Among those small businesses that do offer insurance benefits to their employees, medical and prescription drug plans are by far the most popular, and tend to be the first benefits that companies bring on board. “These benefits provide an opportunity for small business owners to obtain coverage not only for their employees, but also for themselves and their families,” noted Landry. “We also found dental and vision coverage to be common offerings among small businesses, as these products tend to be very popular with employees.”

LIMRA found that life insurance is frequently offered by small firms, whose preference for this benefit is most likely associated with its low cost and ease of administration. However, products such as long-term disability, short-term disability, and accident insurance have fairly low penetration rates among small businesses, leaving employees at these firms potentially exposed to a variety of financial risks.

In February through March 2012, LIMRA conducted a telephone survey of 754 private small businesses in the United States with 1-99 employees (including the owner) that had been in business for at least one year. Respondents were the individuals that made or shared in the firms’ decisions concerning business insurance and/or employee benefits. The sample was weighted by company size, industry, and region to be representative of the total population of U.S. small businesses, based on data from the U.S. Census Bureau