For the past year, a special team of U.S. bank regulators has been on a quiet mission to end the belief on Wall Street that large banks are “too big to fail.”

The team from the Federal Deposit Insurance Corp. has hosted more than two dozen meetings with bond investors, analysts and other stakeholders to lay out in detail how a failing firm would be liquidated.

One of the goals of the roadshow was to warn Wall Street not to count on a repeat of the government bailouts of the 2007-2009 financial crisis, when Washington stepped in to rescue American International Group (AIG) and other financial institutions out of fear that a collapse would be disastrous for the world economy. 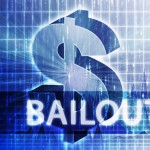 People present at these meetings say the FDIC makes a compelling case, and there are signs that the roadshow is gradually succeeding in shifting market perceptions.

Some bond investors are demanding higher yields on bank debt that they now see as riskier because of the FDIC’s plan, said Brian Monteleone, a bank credit analyst at Barclays who has participated in the FDIC meetings.

Moody’s Investors Service said in March that it may downgrade some bank bonds by year-end since the United States appears less likely to bail them out. The credit rating agency has assigned a negative outlook on bonds from JPMorgan Chase & Co., Bank of America Corp., Citigroup Inc., Wells Fargo & Co., Goldman Sachs Group Inc. and Morgan Stanley.

The evidence of the FDIC’s persuasiveness is anecdotal at this point, however as data on bank credit default swaps, used by investors to protect themselves against default, have not shown a clear shift.

However, investors and analysts say they are studying how to price the heightened risk based on the FDIC’s plan, and expect to see more movement in the coming months.

“To get sophisticated investors to invest better, this is how you do it,” said David Hendler, a senior analyst at CreditSights who hosted a conference with an FDIC official for investors. “You put more of their skin in the game.” Bond investors will have more to lose, Hendler explained.

The debate over whether Washington has solved “too big to fail” will not be settled until another crisis tests whether U.S. and overseas financial stewards have the confidence and skill to gently take down a failing mega-bank without triggering a crippling market shock.

Still, the FDIC believes that if markets know what to expect and stay calm when a financial giant gets into trouble, Washington will also be less likely to panic and enact another bailout like that of insurer AIG in 2008, say people familiar with the agency’s thinking. The FDIC also hopes investors will be more likely to scrutinize mega-bank activity , curbing risky activity if they are convinced the era of government bailouts is over.

The agency has posted on its website slide presentations it has used to show how it would exercise its liquidation authority.

FDIC staff began hosting small gatherings and teleconferences in early 2012 with Wall Street to discuss the details and repercussions of a bank failure, such as what happens to subordinated debt, secured lenders, and bridge financing, according to documents on the FDIC website.

Under the FDIC plan, the agency would take over the top-level holding company, which is usually owned by public shareholders and financed in part by bond investors. The FDIC would then use capital from the holding company to rescue failing subsidiaries, such as deposit-taking banks or trading arms.

Shareholders of the holding company would be wiped out and bondholders would be forced to take a “haircut,” meaning they are paid less than what they are owed.

The FDIC could then form a “bridge” holding company with new leadership, likely pulled from a list the agency is drafting of veteran banking executives and others, according to a person familiar with the agency’s plans.

James Campbell, a research analyst covering big financial companies for the California Public Employees’ Retirement System (CalPERS), said the FDIC’s plan to keep bank subsidiaries from insolvency would go a long way toward protecting depositors and reducing the risk to the financial system.

Still, some investors who have met with the FDIC say there are significant issues to be resolved, such as how to deal with a failed bank’s overseas subsidiaries, which are subject to foreign insolvency practices. Unless these concerns are addressed, creditors of subsidiaries will likely take their money back and feed a panic.

“There are too many connections that credit investors do not understand, so you just assume you need to sell not only the entity that is in trouble, but everything that is connected to it,” said David Knutson, a senior research analyst at Legal & General Investment Management, a unit of Legal & General Group Plc that buys bonds. He has been to multiple FDIC presentations.

The FDIC released a report with United Kingdom regulators in December explaining how they would work together to resolve a U.S. holding company with London-based subsidiaries.

One person with knowledge of the FDIC’s work said regulators now have a better understanding than before the financial crisis of the different laws, bank structures and other factors that could complicate the resolution of a global bank failure. The person called it a “transformational shift” in international dialogue.

The FDIC and the Federal Reserve have asked banks to draft so-called “living wills” to lay out how they could be dismembered if they suffered mortal losses.

The Office of the Comptroller of the Currency has also had some preliminary conversations with bank executives about how to simplify bank structures. In the last month, the office has discussed pushing big banks to assess how many subsidiaries they operate and how they are aligned, an OCC official said.

That could eventually make it easier to sell off subsidiaries to help a bank recover from a downturn or to resolve a failed firm, said the official, who did not want to be identified as the early discussions are not public.

For banks, a workable FDIC liquidation plan could stave off political pressure for more drastic financial reforms following the 2010 Dodd-Frank law, such as calls to break up the big banks and legislation to limit bank size. These proposals may currently be long shots, but another financial blowup could spark the political will necessary to make them a reality.

“Some of us see it as the key to a safer financial system,” said Wilson Ervin, a New York-based senior adviser to the chief executive of Credit Suisse Group AG. “And some pragmatic types realize that if you don’t have a solution to ‘too-big-to-fail,’ then the regulations and restrictions will keep coming, and you won’t really have a good argument to stop them.”

Federal Reserve Board Governor Daniel Tarullo has said the central bank may require big bank holding companies to issue minimum levels of long-term debt. The idea is to make sure they have enough obligations to slash for the FDIC to recapitalize a failing business. But a minimum could force some banks to use costlier forms of borrowing and even pressure them to sell off parts of their business.

“It creates market pressure to downsize,” said former FDIC Chairman Sheila Bair. “That’s what it means to end ‘too-big-to-fail.’ It’s a good thing, not a bad thing, that their funding costs go up.”

The Fed has said settling the minimum debt issue is an agency priority this year.

Darrell Duffie, a finance professor in the business school at Stanford University, said regulators are making progress toward resolving the challenges of shutting down a mega-bank.

“There are still a few missing pieces to the puzzle,” he said. “With some work over the next years, I think there is going to be a significant improvement in the ability to allow banks to fail.”