Commercial property insurance buyers could see prices fall from 10 to 20 percent on non-catastrophe risks in 2014 thanks to the influx of alternative capital to the insurance industry, insurance and reinsurance broker Willis Group Holdings says in its updated forecast.

Pricing for risks exposed to natural catastrophes such as hurricanes will likely decrease in the 5 to 10 percent range, the broker says.

For commercial casualty insurance lines, buyers should expect a continuation of single-digit increases, with higher rate hikes in some states such as California.

The downward pressure for next year’s pricing is being driven by an influx of alternative capital to the insurance industry, particularly the segment devoted to catastrophic property risk, according to Willis.

Overall, 14 insurance lines will likely see rate increases, while eight will see decreases, according to Willis experts. However, in many cases, the expected level of rate increase is moderating, and in some cases, predictions from the spring have reversed. For errors and omissions (E&O) and trade credit insurance, spring predictions of increases have been supplanted by expectations of modest decreases or flat rates. Two exceptions are political risk and terrorism, where Willis says market hardening forces are gathering momentum.

“The reaction has not been all positive, to say the least, especially with respect to the new sources of capital,” Joost writes. However, “some of this represents some real innovation – in an industry often criticized for conservatism and a lack of innovative progress. From our perspective we see clear benefits to these new vehicles, because our perspective is really that of our clients. For our clients – insurance buyers – the increase in supply of capital makes a more inviting marketplace.”

More certain, Joost says, is the reason for the evolution in the industry: “It’s the advent of big data, insurance style – the increased access and ability to work with the data related to the possibilities of risk transfer.”

The following charts from the Willis report show the broker’s expectations for pricing in 2014: 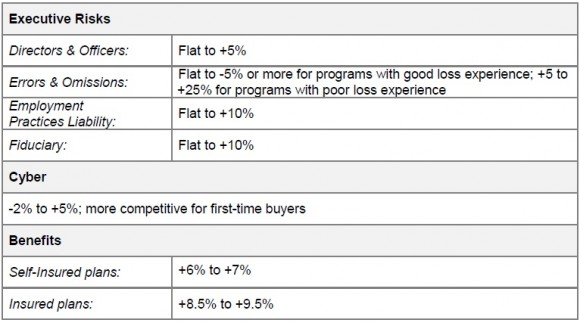