“You can’t circle the wagons,” McGee, Hartford’s chief executive officer, said today at The Year Ahead: 2014, a conference sponsored by Bloomberg LP in Chicago. “You’ve got to pay respect to the idea.”

Paulson pressed McGee to split Hartford in two in 2012, after a stock slump the previous year. Paulson was Hartford’s biggest investor at the time, with an equity stake of more than 8 percent. McGee, 59, resisted, instead reaching deals to sell units and focus on property/casualty coverage.

“You’ve got to run the firm in a way that you think can create shareholder value,” McGee said. “In our case, we made the right set of decisions, I believe. I think that investor actually agrees with that.”

Following a 39 percent stock slump in 2011, Paulson got on a conference call in February 2012 to tell McGee to “do something drastic” to boost the shares. McGee told Paulson on the call that it would be costly to split the company, and that he had an “incredible sense of urgency” to create value for shareholders.

Hartford, based in the Connecticut city of the same name, has sold its individual-life unit, a retirement-plans business, a broker-dealer and an annuities business. The insurer rallied 38 percent in 2012, and has advanced 56 percent this year.

Armel Leslie, a spokesman for Paulson & Co. with WalekPeppercomm, declined to comment.

Paulson’s firm praised Hartford in April for performance “ahead of their own plan and our expectations.” Paulson & Co. reported holding 5.97 million shares of Hartford as of Sept. 30, or about a 1.3 percent stake, as well as Hartford warrants. 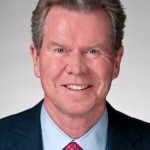 McGee joined Hartford in 2009 after the insurer got a U.S. bailout. He repaid the rescue the following year, raising funds from private investors.

McGee has used hedges to limit remaining liabilities on retirement contracts and paid policyholders to surrender some of the policies, known as variable annuities. Berkshire Hathaway Inc. agreed in June to pay $285 million for Hartford’s U.K. variable-annuity business, adding to assets Warren Buffett’s firm can manage.