Direct premiums written for the directors’ and officers’ liability insurance industry grew 7.35 percent year over year in the first half of 2014, rising to $2.91 billion, according to an SNL Financial analysis of monoline D&O policies.

Growth in written premiums was assisted by rate increases in D&O liability lines in both 2013 and 2014. Average total D&O liability program rate hikes previously amounted 3.6 percent year over year in 2013, according to Marsh’s annual report on the U.S. insurance market released in February 2014. Throughout the first half of 2014, rates have increased steadily on a month to month basis according to MarketScout, ranging from 1 percent in June to 3 percent in March. The median month to month rate increase was 2 percent, which occurred in January, April and May.

American International Group Inc. remained strongly positioned as the D&O market leader in the first half of 2014, with 16.60 percent market share. It posted 15.37 percent year-over-year growth in direct premiums written for the first half.

In an August interview with SNL, Grant Merrill, commercial D&O and crime manager for the EMEA region at AIG, elaborated upon how the insurer looks for ways to innovate and differentiate itself in the professional liability marketplace. In June, AIG announced a new D&O policy endorsement that ensures primary D&O policy funds are immediately available to clients named as defendants in securities lawsuits for the preparation of “event studies.” Additional premiums were not required for this endorsement.

CNA Financial Corp., which ranked fourth by market share as of June 30, was the fastest growing D&O insurer in the top 25, with a year-over-year growth rate of 62.43 percent in the first half of 2014.

Rate increases have been accompanied with improved loss experience in the D&O liability industry. The direct incurred loss ratio improved to 47.79 percent in the first half from 50.35 percent a year ago, having consistently remained at or below 50 percent in the last three years.

Favorable loss reserve development contributed to a few companies significantly outperforming the loss trend experienced by the industry. Chubb Corp. and Liberty Mutual — with 8.76 percent and 2.13 percent market share, respectively — outperformed peers by posting loss ratios of 9.20 percent and 18.46 percent as of June 30 — the second- and third-lowest loss ratios during the period. ICI Mutual Insurance Co. a RRG, however, nabbed the top spot during the first half of the year by reporting a 2.75 percent loss ratio. Chubb disclosed that much of its $80 million favorable loss reserve development in professional liability lines during the second quarter of 2014 occurred in D&O policies on accident years prior to 2010. ICI Mutual also cited $12.2 million in favorable loss reserve development during 2013 as the main factor in a declining loss ratio. In its case, however, $10.2 million worth of development occurred on claims originating from 2012. 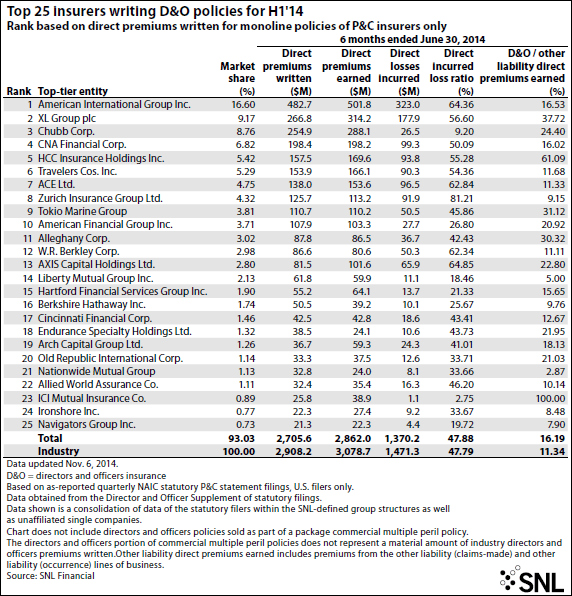