Legislation to speed trade deals through the U.S. Congress cleared through a key committee on Thursday, but low Democratic support signaled a looming battle over a Pacific trade pact central to President Barack Obama’s strategic shift toward Asia.

Democrats and Republicans clashed over proposals to punish countries that manipulate their currencies to gain an export edge and ways to give lawmakers more leverage over trade deals like the 12-nation Trans-Pacific Partnership.

Despite the partisan wrangling, the vote in the House of Representatives’ Ways and Means Committee marked an important step forward for the legislation, which would prohibit Congress from amending trade deals and allow for just yes-or-no votes.

Obama and major U.S. trade partners, including Japan, have said the measure is vital to seal the TPP deal. 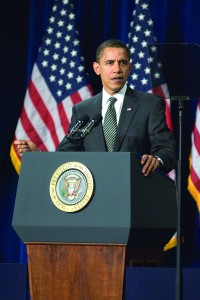 A companion “fast-track” bill cleared a Senate panel on Wednesday, and both are now ready for action in their respective chambers.

Still, the way forward is likely to be treacherous with many of Obama’s fellow Democrats in opposition over worries that trade deals could harm jobs and the environment, leaving the White House to rely heavily on Republican support.

The House committee’s 25 to 13 vote in favor of the bill provided an exhibit of this unusual alliance, with only two of the panel’s 15 Democrats voting for the legislation – much less support than it received in the Senate panel.

Committee chairman Paul Ryan joked it was a “strange world” when he had to defend Obama against amendments moved by his own party.

The panel’s top Democrat, Sander Levin of Michigan, is one of the fiercest opponents. He put forward an alternative backed by unions and the House Democratic leadership, but Ryan did not allow a vote.

In both the House and Senate committees, lawmakers pressed to insert provisions allowing the United States to punish trade partners who deliberately weaken their currencies to make their goods more competitive in global markets.

Both panels largely fended off those efforts, with the House committee rejecting a tough currency rule 24 votes to 14. The Obama administration had warned the provision would sink the TPP, as trading partners worried that central bank efforts to boost growth could come under U.S. attack if their currencies weakened.

The House panel did not take up a Senate tweak excluding countries deemed soft on human trafficking from fast-tracked trade deals – potentially hitting TPP partner Malaysia. Ryan said the change would make it very difficult for the administration in negotiating the TPP accord.

Obama sees the TPP as an important counterweight to China’s growing clout in the region. An agreement would stretch from Japan to Chile and cover a third of world trade.

But U.S. trading partners have expressed hesitance to finalize a deal that could be reopened by the U.S. Congress.

To make the fast-track bill more palatable for critics, its sponsors inserted a provision that would turn off the streamlined procedures if a trade deal did not fulfill objectives set by Congress.

But some House Democrats said that did not go far enough. “I don’t want at the end of the deal to be told that you did the best you could,” said New York’s Charles Rangel.