Workers’ compensation insurers reported a 5.3 percent increase in direct written premiums during the first six months of 2015 versus the same period in 2014, according to actuarial firm Demotech’s review of second quarter 2015 data.

Demotech analyzed data reported by insurers to the National Association of Insurance Commissioners.

Workers’ compensation direct written premiums have now increased for five straight years. This growth has been driven mainly by rate increases and other insurer pricing actions in addition to moderate payroll growth. Written premiums at mid-year 2015 of $26.9 billion are at an all-time high and are a significant increase from the mid-year 2010 low of $18.8 billion.

The top 25 workers’ compensation insurers, ranked by the highest dollar amount of direct written premium growth, reported a 23.2 percent increase during the first six months of 2015 versus the same period in 2014. This increase is impressive since 10 of the insurers in this year’s top 25 group were also in last year’s top 25 group. For all other workers’ compensation insurers combined, reported premium decreased by 0.1 percent.

AmTrust Group continues to grow, with four of its insurers in the top 25 group. These same insurers were in last year’s top 25 group. In a recent conference call, AmTrust attributed its growth to successfully targeting small businesses in key states and to rate increases.

Texas Mutual Insurance Co. has been in the top 25 group for five consecutive years.

Most of the other top 25 insurers are members of large national and international insurance groups. Some of the growth reported by these insurers may be associated with renewals of business formerly written by other companies within the group. For instance, Torus National Insurance Co., which is a member of Enstar Group, is renewing select business previously written by a company recently acquired by Enstar.

Medical costs continue to represent a majority of workers’ compensation losses. The impact of the Affordable Care Act on future healthcare system costs remains uncertain. Escalating prescription drug costs and aging of the workforce may result in new or increased claim costs. Concurrently, interest rates continue to be at historically low levels; investments are generating less investment income which might help to offset these claim cost increases. Therefore insurers must continue to focus on underwriting profitability for this line of business.

Premium is often described as the trading of a small certain loss for a large uncertain loss. For workers’ comp, there is great uncertainty since this loss is often paid out over many years. It may be decades before we can tell whether these top 25 insurers grew profits as well as premiums. 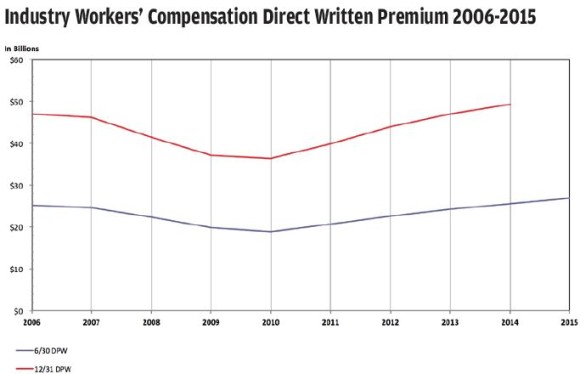 Groeschen is chief consulting actuary and risk analyst with Demotech Inc. Founded in 1985, Demotech is a Columbus, Ohio-based financial analysis firm that provides services to regional insurance companies, title underwriters and specialty insurance markets. Demotech has been assigning Financial Stability Ratings® (FSRs) in these markets since 1989. The FSR is an indicator of future financial stability and is accepted by mortgage lenders as well as underwriters of umbrella insurance and agents' errors and omissions insurance. Website: www.demotech.com. More from Steven J. Groeschen