The impact from climate change is more imminent than most believe, and it’s going to take a big economic chunk out of a lot of bottom-lines.

That’s according to a recent report from the Institute for Policy Integrity, a non-partisan think tank within the New York University School of Law.

The study’s authors reportedly reached out to more than 1,000 economists and received 365 completed surveys focused on what impact they climate change will have on the global and U.S. economy.

“Economic experts believe that climate change will begin to have a net negative impact on the global economy very soon – the median estimate was by 2025, with 41 percent saying that climate change is already negatively affecting the economy,” a report on the survey states.

The report showed that most economists who responded believe that numerous sectors of the U.S. economy will be harmed by climate change, including insurance.

The biggest sector expected to be impacted was agriculture, with 94 percent of respondents predicting a negative impact. That was followed by fishing (78 percent), utilities (74 percent), forestry (73 percent), tourism/outdoor recreation (72 percent), insurance (66 percent) and health services (54 percent).

“More than three-quarters of respondents believe that climate change will have a long-term, negative impact on the growth rate of the global economy,” the report states.

Derek Sylvan, one of the authors of the report, said his biggest takeaway from the survey was that the majority of those economists who responded seemed to believe the impacts of climate change would be would be more significant and happen sooner than most believe.

“That’s sort of the main overall message we found in terms of impact,” Sylvan said.

On average economic experts predicted far higher economic impacts from climate change than the estimates found in older surveys of economists and other climate experts. The institute conducted a similar survey, though with a narrower focus, which the authors compared with this one, Sylvan said.

Respondents in the latest survey predicted a global gross domestic product loss of roughly 10 percent if the global mean temperature increases by 3°C relative to the pre-industrial era by 2090, an increase that approximates the “business as usual” emissions scenario under which no carbon emissions reduction is undertaken.

Respondents believe that there is greater than a 20 percent likelihood that this same climate scenario would lead to a “catastrophic” economic impact, which was defined as a global GDP loss of 25 percent or more.

Beside the main message that most respondents believe the impacts of climate change on the economy will be more profound and hit earlier than most expect, there were a few policy takeaways to be found among the answers to the survey.

“There seemed to be pretty widespread agreement that aggressive climate policies are economically beneficial for the United States,” Sylvan said. 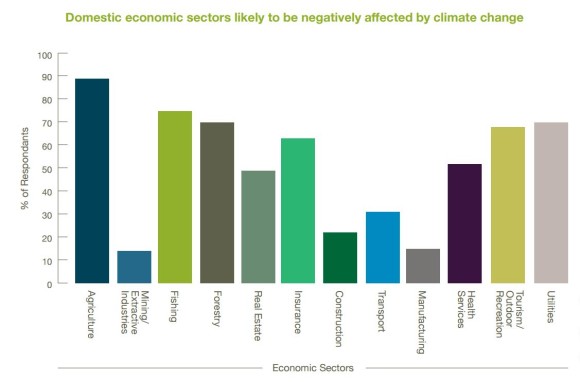 The authors say they sent each respondent a link to a 15-question online survey, with questions focused on climate change risks, economic damage estimates and policy responses. In total, 1,187 experts met their selection criteria, and the authors received 365 completed surveys.

The criteria required the experts to have written academically on climate change – either about negative or positive effects, Sylvan said.

“We did our best to avoid anything that would be clearly biased in either direction,” he said.

The survey covered questions on the following topics: