You have to be either strange or bored to Google the phrase, “What do climate change and Thanksgiving have in common?”

Believe it or not I got results, and found that there are at least two things those disparate topics have in common.

First, much like with “Fight Club,” the No. 1 rule is you don’t talk about climate change at the dinner table during Thanksgiving.

OK, it is a bit of a stretch to say this ties these two topics together. But it’s close enough for some of us.

Thanksgiving is a fun, light-hearted day of families coming together and most people are probably of the opinion that any sort of political talk should be banned. Climate change can be a doubly-charged issue if some of the Thanksgiving attendees don’t believe the climate is changing, or they feel a changing climate is not the result of man’s activities – this means you have one argument about whether it’s real, then another joust over whether carbon emissions are to blame. 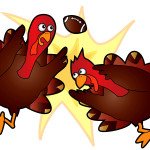 On the flip side, you could end up arguing with someone who continually points to the fact that their weekend wear over the past four winters has consisted of shorts, a T-shirt and sandals.

“And what the heck’s going to happen to the polar bears?”

You don’t want to hear that. But mark my words, somewhere out there this admonition will go unheeded.

Over the past few years a handful of writers have come to the conclusion that people can’t resist a good debate with friends and family, despite there being so many other innocuous subjects to choose – as well as three NFL games on television – so they offered up some advice to those who are hell-bent on stuffing the normal chatter around the Thanksgiving feast with their opinions.

A blog published last year on the website of the Union of Concerned Scientists, a group that lands decidedly on one side of the debate, was titled “How to Talk About Climate Change at Thanksgiving: Recipes for Good Conversations.” The blog, by Aaron Huertas, science communication officer for the group, acknowledged the value of tried-and-true policies exercised by many families that ban political discussions around the dinner table.

But for those who insist on tackling the sometimes taboo topic, he offered an even-keeled approach that involves finding a common ground.

The blogger advised that if you expect to encounter objections rooted in conservative politics, it’s worth learning about former South Carolina Congressman Bob Inglis and the R Street Institute before Thanksgiving dinner.

“They have sensible ideas for addressing climate change based on conservative values and they have good-faith criticisms of liberal policies, too,” Huertas writes.

If you ask me, preparing in anticipation of a debate on Thanksgiving is like putting the turkey in the oven and purposely leaving it off. It’s just about as productive, and no one’s going to be happy.

The blogger doesn’t stop there. He also advised that if you have a friend or relative who thinks addressing climate change will harm the economy, look up information countering that argument.

He suggests reading up on Ceres, a nonprofit organization that advocates for sustainability, and CDP, a not-for-profit group providing a system for companies and cities to disclose environmental information.

Most of the advice I found on the Internet was for those who come down on one side of the debate, so I challenge you to find advice for people who do not believe in climate change, or don’t believe that it’s manmade, and how to present their opinions to that granola-eating, hemp-wearing, go-green cousin-in-law. Email the link to me, and anyone you think who can benefit from it.

I did find a title that sounded extremely promising: “Could Climate Change Ruin Thanksgiving Dinner?” But it turns out that the article actually focuses on how climate change will impact Thanksgiving dinner: Not only might climate change affect the cost and quality of Thanksgiving Day foods eventually, but “warmer temperatures can impact turkey meat texture, appearance and taste, research finds.”

Since I write about this topic regularly, I guarantee you I won’t be discussing it at Harrah’s sportsbook in Las Vegas, where I typically spend my Thanksgiving. It’s not like anyone could hear me anyway over the roars of agony and exaltation from betters tensely watching football action on a wall of big screens.

The second thing that climate change and Thanksgiving have in common? Both topics have a lot of neat factoids attached to them.

Just so you don’t fill completely ripped off by my headline, if you are indeed disappointed, I gathered a few facts on each topic. If you persist on talking about climate change, feel free to use them for your arguments, or to change the subject.

According to the National Oceanic and Atmospheric Administration, October 2015 was warmest October on record for the globe and greatest above-average departure from average for any month.

The average temperature in October across land and ocean surfaces was 1.76 degrees Fahrenheit above the 20th century average, making it the highest for October on record and it surpassed the previous record set last year by 0.36 degrees Fahrenheit, according to NOAA.

It also marked the sixth consecutive month that a monthly global temperature record has been broken.

U.S. Census statistics show there were roughly 6,500 living members of Wampanoag American Indian tribal group as of 2010, half of whom reside in Massachusetts. The Wampanoag were the American Indians who, along with the Plymouth colonists, participated in the autumn feast widely believed to be one of the first Thanksgivings. The Wampanoag were essential to the survival of the colonists during the newcomers’ first year.

According to NASA, Earth’s climate has changed throughout history.

“Just in the last 650,000 years there have been seven cycles of glacial advance and retreat, with the abrupt end of the last ice age about 7,000 years ago marking the beginning of the modern climate era — and of human civilization,” NASA states. “Most of these climate changes are attributed to very small variations in Earth’s orbit that change the amount of solar energy our planet receives.”

It’s forecast that 228 million turkeys will be raised in the U.S. in 2015, down 4 percent from the number raised during 2014, according to the USDA National Agricultural Statistics Service.

The current warming trend “is very likely human-induced and proceeding at a rate that is unprecedented in the past 1,300 years,” states the IPCC Fourth Assessment report. The acronym stands for Intergovernmental Panel on Climate Change.

Roughly 3 billion pounds of sweet potatoes, a popular Thanksgiving side dish, were produced by major sweet potato producing states in 2014, according to the USDA National Agricultural Statistics Service.

Increases in atmospheric carbon dioxide have driven up global surface temperatures by roughly 1 degree centigrade since 1880, and “the 10 warmest years ever recorded — with the exception of 1998 — have occurred since 2000,” according to The Scientific American. “2014 was the warmest year ever recorded.”

Domestic turkeys cannot fly. If you’re in doubt, do yourself a favor and search YouTube for an old clip of “WKRP in Cincinnati,” episode 7 from season 1.

Here’s a good teaser line from that episode: “As God is my witness I thought turkeys could fly.”

Sea levels have risen 6.7 inches over the past century as a result of human-induced global warming, according to The Scientific American.

Abraham Lincoln proclaimed Thanksgiving a national holiday in 1863. In 1939, Franklin Roosevelt moved Thanksgiving Day forward one week, as it is presently celebrated, according to the National Turkey Federation.

Also from the National Turkey Federation: White meat is generally preferred in the U.S.,while other countries choose the dark meat. A turkey typically has roughly 70 percent white meat and 30 percent dark meat. And if you didn’t already know it, white meat has fewer calories and less fat than dark meat.

Editor’s note: Climate Control has been posted a day early to accommodate Thanksgiving. Have a great one!