What to do about a warming planet?

Just crank up the air-conditioning.

No one’s being a smart aleck, and you won’t find any sarcasm in a recent study by a Stanford University professor that shows what it will feel like to live in various cities several decades from now.

The author of the study says it’s intended to be an indicator of projected climate change to help inform future decision-making – especially if you want to know where to move by 2100.

No worries if you’re not upwardly mobile, yet still alive, by that time. You can still find respite from those more frequent hot days if you don’t mind paying through nose on the electric bill, says the study’s author, professor Ken Caldeira, a professor in the department of global ecology in Stanford University’s Carnegie Institution for Science. 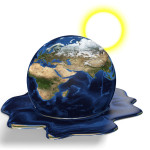 Caldeira isn’t indifferent to the effects of climate change, and he’s not condoning doing nothing to reduce carbon emissions. In fact, he’s considered a pioneering climate scientist who’s often credited with coining the term “ocean acidification,” which many environmentalists have long used to sound the alarms about global warming.

He just wants to offer a balanced perspective of what the world may look like in coming years due to climate change.

“A lot of climate stories are dismissive or apocalyptic,” he said.

Some regions are expected to be hotter due to a warming planet, while surprisingly other places could be cooler on average.

Caldeira’s study shows that a global mean surface temperature rise of between 2.6–4.8 °C (4.68-8.64F) by year 2100 as projected in some studies, if emissions go unmitigated, could alter the present balance between residential heating and cooling needs across the country, “potentially causing regions with moderate climates to warm and shift some locations from primarily heating to primarily cooling demand.”

It seems such changes are already underway. In the last 20 years, a measurement the report refers to as “U.S. heating degree-days” fell, while cooling degree-days rose due to warming trends, according to the study.

What’s it mean if this trend continues? If you live in Phoenix, Ariz., summer days may get even hotter – if you can imagine it being hotter in Phoenix. But if you do live there, you’re probably already used to using a lot of air-conditioning. You’ll just use a lot more of it.

Someone in Minneapolis, Minn., may not see much difference at all. And some places may be even colder on average than they are now. In the future, there may be fewer days in which people in San Francisco will need to turn on the air-conditioner. The need for electricity could be reduced in places like Denver and Las Vegas in the future, the study shows.

Conversely, some of those colder places may require more heating on average.

“While those are big changes, it’s still the same planet,” Caldeira says. “It’s substantial, but it’s not the end of the world.”

Cue the collective 7.3-billion-and-counting sigh of relief. Might as well go ahead and break out the floaties and blowup rafts, because there are no shortage of studies that also anticipate a sea level rise of roughly 2 feet in the next century.

Yet, even that sea level rise is expected to be gradual, and it’s something people with wealth and resources can deal with, Caldeira said.

“I think the changes anticipated this century for the most part are of the scale that people who live in rich, well-developed countries like ours can deal with,” he said.

However, the shift toward spending even more on energy may be hard to swallow. A 2009 Residential Energy Consumption Survey shows space heating and air-conditioning accounted for 41 percent of the expenditure of the average U.S. household.

These changes may not be so easy for those who live in flood plains that are expected to be prone to more flooding, or those living in impoverished nations.

It could also make things more difficult for insurers trying to assign risk to certain areas.

He compares predicting future weather patterns to playing roulette. You put your money on 36 expecting it to come up at least one out of 38 times – this accounts for 0 and 00 on the wheel. You may be disappointed, or possibly delighted. The number 36 could hit once, twice or more in those 38 spins. Or it may not hit at all.

Looking at long-term climate change and its impacts gives anticipated averages to planners, insurers and anyone else looking toward the future, Caldeira said, adding, “Predicting those statistics is a lot harder than predicting the averages.”

While it was Caldeira’s intent is to offer people a look at what he thinks the future holds in terms of hotter places versus colder ones, he doesn’t wish to give anyone the sense that there’s nothing to worry about in the pending wake of a changing global climate.