Businesses known for their uniforms are worried about lawyers in business suits in the wake of a change in the nation’s labor laws affecting their liability for employment practices.

The change could unravel the franchise business and wreak havoc for thousands of companies and contractors, according to franchise industry groups and insurance professionals.

In a decision known as Browning-Ferris Industries (BFI), the National Labor Relations Board (NLRB) in August 2015 ruled that a small business franchisee could be considered a “joint-employer” with the franchisor company that lends its brand name and marketing to the small business. This ruling overturned decades-long regulatory and legal precedent for determining whether a joint employer relationship exists under the National Labor Relations Act. Previous law held that a franchisor that did not directly employ or control the franchisee’s workers was exempt from joint liability for employment practices happening at the local franchisee.

The new NLRB standard now considers a franchisor as a joint employer not only if it exercises direct control of employees’ activities, but also if it has “indirect” or even “potential” control.

That’s a big deal and could wipe out franchising, according to Peter Taffae, managing director of FranchisePerils, which operates a national program administrator offering a program specifically for franchisors.

“For 30 years the Labor Relations Board has said for a joint employer to be responsible they have to have direct involvement,” said Taffae. “Now, after 30 years that’s changed. The NLRB now says that the employer only needs to have an indirect relationship.”

Franchisors are not the only business group at risk under the new NLRB standard. Employers using professional employment organizations, or PEOs, staffing agencies, independent contractors and even general contractors now have employment practices liability insurance (EPLI) risk that they didn’t have before.

In its decision to change the standard, the NLRB said that the old standard was “increasingly out of step” and “outdated” with changing economic circumstances, particularly the recent dramatic growth in contingent employment relationships. The NLRB stated the old standard “did not reflect the realities of the 21st century workforce.”

A rise in temporary employment in the U.S. workforce is one reason the NLRB cited as a need for the change. Almost 2.9 million Americans had jobs through temporary agencies in 2014, or 2 percent of the workforce, up from 1.1 million in 1990, the board said.

Wilma Liebman, a former head of the labor board who advocated for the new standard, told Bloomberg in August that shifts in the workforce threatened to make basic protections provided by labor laws “illusory.” Often the company with deeper pockets that hires a subcontractor sets conditions of employment through a contract, she said. These companies should be at the bargaining table, she said.

“The nature of employment and the nature of the economy has changed a lot,” Liebman said in the Bloomberg interview.

Unions and others supporting the change say the decision was necessary to bring companies that indirectly control working conditions to the bargaining table, and to curb the use of “permanent temps” who are paid less and do not get the same benefits as ordinary employees.

But the change could have serious effects on thousands of small business owners, according to Darrell Johnson, chief executive of FRANdata, a provider of information and analysis on the franchise industry located in Arlington, Va. “The Browning-Ferris decision sets a dangerous precedent that is greatly disruptive to the franchise business model and to thousands of small businesses around the country,” he said.

According to research released in December by FRANdata, at least 40,000 small businesses operating in more than 75,000 locations are at risk because of the recent NLRB ruling, which the group says jeopardizes the ability of franchise small business owners to hire, schedule and set the salaries of their employees.

The ruling has removed much of the protection franchisors have enjoyed, with implications for EPLI policies.

A franchisor, such as McDonald’s, Subway, Chem-Dry or even UPS stores, could now be pulled into a lawsuit, for example, when one franchisee terminates an employee and that termination results in some type of employment practice liability issue.

This expansion of the scope of liability is going to be “monumental” for many businesses, Taffae said. Not only could it change the franchising industry but also it’s likely to encourage the plaintiff’s bar to chase after some deep pockets in various industries, according to Taffae.

The most obvious example of the widening scope in franchisor liability involves the world’s biggest fast food restaurant. In December 2014, the NLRB determined that McDonald’s is a joint employer, pointing to the franchisor’s comprehensive computer system, which tracks labor usage and costs, as one of the ways it controls franchisee operations.

The fast food giant is fighting back to protect its decades-old franchise model that holds the corporation does not directly employ the staff of its franchisees. In a court filing in late October, McDonald’s said it had already spent more than $1 million on the legal fight and produced more than 160,000 pages of documents in response to the NLRB case.

The case, NLRB v. McDonald’s USA LLC, U.S. District Court for the Southern District of New York, scheduled to go to trial before an administrative law judge soon, is expected to have a major impact on U.S. franchisors.

The new NLRB standard could also be dangerous for many in the construction business.

Denise Gold, associate general counsel for the Associated General Contractors of America (AGC), which represents 26,000 members nationwide, says while NLRB decision is not an immediate problem, it has definitely muddied what had been an established and clear precedent for years and has the potential to be a major problem for contractors.

Employers aren’t finding much direction from the federal agency either, Gold said. The NLRB’s “totality of circumstances test” to decide whether there is enough authority to control, either indirect control or direct control, to create joint employer status is so vague that it gives employers little guidance as to when joint employer status exists and does not exist, she maintained. It’s not only that the standard is new, but it is also not clear.

“Theoretically, the NLRB could have come up with very specific guidelines but instead they decided to create a more-vague standard,” she said. In her opinion, that vagueness leaves employers with little knowledge as to when they might be joint employers.

“And being a joint employer is an important thing because it exposes the employer to potential liability for unfair labor practices of other companies, for potential bargaining negotiations, for breaches of collective bargaining agreements, and for what you might call economic protest activities,” Gold said. “If the employer is not deemed as a secondary employer and instead (considered) a joint employer then they can be subject to activities like strikes, boycotts and picketing.”

The impact is potentially significant, Gold says. “We don’t know quite yet as to where the line is drawn on who is a joint employer,” she said. “We have to wait for further cases to come out to flush out that standard.”

“Any small business or big businesses needs to have employment practices liability insurance or other management liability coverage and that coverage is usually based on the number of employees an employer has,” Layman said. “The more employees the higher the premium.”

In the new joint employer landscape, if a franchise owner in a particular community is required by an insurer to have its franchisor co-sign on an EPLI policy, Layman says, “the entire number of employees in the system may be factored into that policy.” So a single franchise operator with 25 employees now has lost a significant amount of autonomy over their operation. “Their franchisor has to be involved and their premium may be much higher because of the potential liability that the franchisor and franchisee may jointly share.”

Small businesses could see EPLI premiums skyrocket or not be able to buy coverage at all, Layman fears.

“We have heard from our members who are franchisees/small business owners that a carrier wouldn’t write an EPLI policy to a franchisee without naming the franchisor as an additional named insured,” Layman said. Should the franchise owner attempt to secure coverage alone, the market becomes “markedly more expensive for the franchisee” – that’s a new trend, he said. “A year ago, five years ago, that wasn’t happening but the looming and growing threat of joint employer is having that impact.”

It’s not just the NLRB advocating a new joint employer doctrine, according to Layman. “Other federal agencies, even at the state level and municipal level, are tackling the issue. “It’s a growing threat in pockets of government and the number of businesses at stake, not just in the franchising world, is great,” he said.

Some states, including Michigan, Texas, Tennessee and Louisiana, have already passed legislation aimed at protecting franchisors from being considered a joint employer with their franchisees. Virginia and Wisconsin may also follow suit.

“This joint employer issue is just beginning to be an issue from an insurance stand point,” says Richard S. Betterley, president of Betterley Risk Consultants Inc. based in Boston.

Betterley is the writer and publisher of an annual review of the EPLI market. The report, Employment Practices Liability Insurance Market 2015, published in December took aim at the growing insurance concern over joint employer exposures.

“In this year’s survey, we ask carriers directly about their ability and willingness to include joint employers as insureds,” Betterley said. “For the most part they answered optionally – in other words they are willing to consider it.”

Betterley said most insurers didn’t say “no” to joint employers, but he admits that most of the carriers responding to the survey “tend to respond relatively liberally because they don’t want to shut off business opportunities so they tend to say they are more willing (to insure) than they are in practice.” (See chart below)

“This is the beginning of a problem (where) other parties will be held liable or dragged into suits successfully where they didn’t used to be,” Betterley said. “That’s going to be in the franchise business, in the construction world where there is a lot of subcontractors and potentially even in the independent contractor, 1099 world.”

At the least, the NLRB ruling has made insurers rethink their approach.

“The reality is that insurers are becoming cautious because the exposure has changed,” Betterley said. “In the past if there was a request to add the franchise the underwriting assessment would be presumably that the risk is minimal and yes probably they would. Now they have to look at it and say, ‘No, wait a minute there’s real exposure here.'” As a result of the new exposure, insurers are reacting, but at varying speeds.

“The potential for claims has increased but the actual level of claims has probably not yet increased,” Betterley said. “But you’ve got to believe that that’s just a tidal wave on the horizon that hasn’t yet hit shore.”

Taffae says the trend is quite concerning because there’s no way to manage this risk.

“From our perspective, from a transfer of risk perspective, it’s very scary,” Taffae said. “There’s just no way to underwrite it. … This whole joint employer thing could really blow up.” 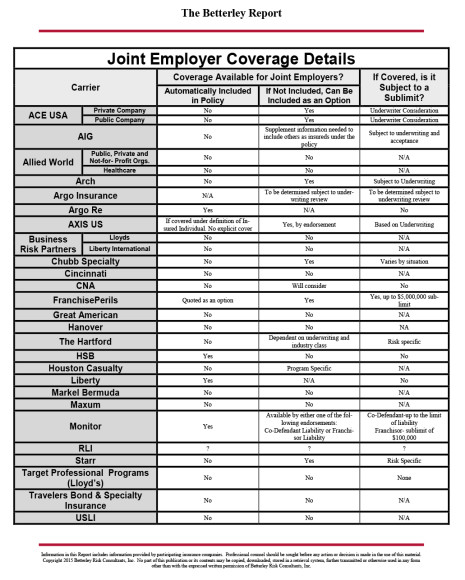