Constant reminders in the media over threats of rising sea levels, more frequent storms, or the promise of blistering droughts along with water scarcity still won’t get people to prepare for the anticipated effects of climate change.

Getting people to use time and resources to be more prepared, or build smarter, is and may always be an uphill battle.

There’s plenty of evidence to support this – not that insurance professionals need to be told it’s hard work getting someone to fork over money for what many consumers regard as little else but peace-of-mind.

A survey of small business owners in 2015 by Nationwide shows that less than half of them (41 percent) believe climate change has increased the chance of a disaster affecting their company. It also showed three-in-four don’t have a disaster plan in place.

More surprisingly, perhaps, is that 35 percent of those who took the poll actually believe climate change decreased the chance of a disaster striking their company.

But those statistics are not why I’m writing about a poll that was conducted last year.

The Nationwide poll was conducted right around the period when news outlets were churning out warnings that the world were about to experience one of the greatest El Niño’s in recorded history.

Despite abundant “El Niño-this, El Niño-that” warnings that only a cave dweller could escape, small-business owners at the time were split over whether El Niño would increase (37 percent) or decrease (37 percent) the likelihood of a natural disaster impacting their company.

Is this just buoyant optimism in play? The glass is half-full, and if it rains really hard it’ll just fill up? Or perhaps it’s skepticism about scientists and forecasters in general?

“They didn’t feel like a disaster would hit their area,” said Mark Anderson, associate vice president of commercial lines property technical claims at Nationwide, who talked to me about the poll. “They did not feel that it would impact their business. I’m not so sure that it’s the science that’s causing the confusion and impacting their decision as to whether they should have a disaster recovery plan.” 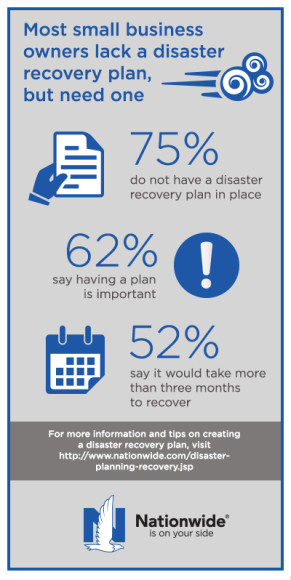 So what he’s saying, and the poll seems to back this up, is that insurance has always been, and will always be, hard to sell to pie-eyed optimists and skeptics alike.

Anderson and Nationwide are themselves optimistic enough about selling small business policies so as to put considerable resources – and numerous small business polls – into getting these people to take disaster recovery planning seriously.

They must be having some success. Nationwide lays claim to being “the No. 1 total small-business insurer in the country” with more than 500,000 small-business clients.

Which pretty much makes Anderson somewhat of an authority on how small businesses think when it comes to buying insurance.

“I just think they don’t understand the cyclical nature of the insurance business,” he said. “We’ve seen, in this business, at least in the length of time that I’ve been here, in 38 years in the insurance business, it runs in cycles. 2005, with Hurricane Katrina, in 2012 with Superstorm Sandy, you could say. Are we within a year or two of having another one?”

So the list of tough-sells now includes optimists, skeptics and the as-of-yet unaffected.

“If they weren’t impacted in the past, the likelihood that they’re going to feel that a disaster recovery plan is necessary – they may not feel it’s all that important,” Anderson said.

And that explains why three-in-four small businesses don’t have a disaster recovery plan.

If the possibility of disaster and total loss don’t convince small businesses to prepare and to buy insurance – until they get hit by disaster and are made believers, unless the government swoops in and bails them out – then maybe having to dole out cash for costly property upgrades will.

The agreement to battle climate change in Paris in December last year in which U.S. and the rest of the world’s leaders outlined plans for carbon reduction called for some serious mitigation efforts.

Expect building codes to change, along with new and stricter code enforcement rules.

Many small business owners won’t be unprepared for these code changes.

“As we see the changing business needs, and the changing codes within the municipalities, oftentimes, these businesses cannot rebuild their business without meeting the current code,” Anderson said. “That can be several thousands, if not hundreds of thousands of dollars. Oftentimes, policies are limited to the amount of coverage that they provide for code upgrades. A customer needs to know that they’ve got coverage for that additional expense associated with code upgrades.”

On a standard property policy, if the coverage limits are not raised for code upgrades, there is typically only $0 to $25,000 in coverage, he said.

“Depending upon the municipality, we’re seeing some code upgrades that can run several hundred thousand dollars, and once that limit is met or exceeded, then that additional expense is going to be incurred by the member,” he said. “That’s something that the agent, and the policyholder needs to clearly understand – what coverage is being afforded under their particular policy.”