Reagan Consulting found that commercial lines organic revenue growth slowed to 3.1 percent for the second quarter, down from 5.1 percent for the first quarter of 2016. Employee benefits was the fastest-growing line of business, with organic growth of 6.2 percent, while personal lines grew at 1.7 percent.

“The powerful headwinds of soft commercial lines premium rates and a muddling economy are even stronger in 2016, after blowing for more than a year,” said Jim Campbell, principal of Reagan Consulting, a management consulting and merger-and-acquisition (M&A) advisory firm for the insurance distribution system.

Profit margins declined to 23.1 percent for the second quarter, as measured by EBITDA (earnings before interest, taxes, depreciation and amortization). This was the lowest second-quarter pace since 2012 and down from the 24.6 percent margin for second quarter 2015.

Commercial property/casualty rates declined 3.7 percent in the first quarter of 2016 (most recent figures available), as measured by the Council of Insurance Agents and Brokers, the largest decrease since the current trend of market softening started in 2014. The U.S. economy grew at merely a 1.2 percent annualized rate during the second quarter of 2016, following a 0.8 percent rate for the first quarter, according to figures from the U.S. Department of Commerce. 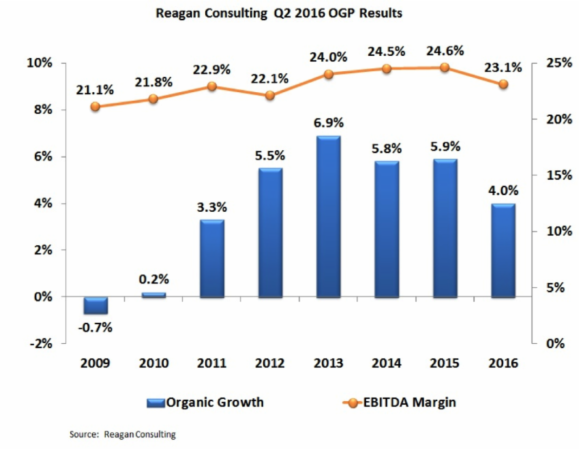 Reagan Consulting has conducted its quarterly survey of agency growth and profitability since 2008, using confidential submissions from approximately 140 mid-size and large agencies and brokerage firms. Roughly half of the industry’s 100 largest firms participated in the survey. Median revenue of the firms completing the survey is approximately $18 million, making the study the preeminent survey of the industry’s mid-size and large privately held brokers.

Agents and brokers in the Reagan Consulting OGP survey expressed optimism for full-year profitability, projecting a year-end EBITDA margin of 20.0 percent. “If achieved, that would be generally consistent with the 20.1 percent margin achieved in 2015,” said Campbell.

M&A activity among agents and brokers, while not measured by the survey, is on track for the second most-active year on record. Data from SNL Financial showed 207 announced deals in the second quarter of 2016. Campbell noted that 2015’s M&A transaction level exceeded the previous record year by more than 40 percent.