While states have made progress in reducing teen driver-involved traffic crashes and deaths over the past decade, teen drivers are still 1.6 times more likely to be involved in a fatal crash than their adult counterparts, and teen-involved crash deaths spiked 10 percent in 2015.

A new report from the Governors Highway Safety Association (GHSA) shows that the improvement in fatal crash rates among 18- to 20-year-old drivers was considerably less than for their 15- to 17-year-old counterparts, and that older teen drivers are involved in more fatal crashes than younger teens.

The report, Mission Not Accomplished: Teen Safe Driving, the Next Chapter, funded by a grant from the Ford Motor Company Fund, calls on state highway safety offices and teen driving advocates to carefully monitor what is happening with teen-involved motor vehicle fatalities while expanding their focus to address the heightened crash risk for older teens.

The 2015 data from the National Highway Traffic Safety Administration (NHTSA) showing the jump in teen-involved crash deaths is the first uptick since 2006, countering the downward trend seen over the past 10 years.

“This data shows that smart programs that focus on teen driving behavior have been very successful in helping novice and younger drivers be safer on the roads, but that we still have more to do,” said Jim Graham, global manager for the Ford Driving Skills for Life program. “We also need to make sure older teens benefit from these efforts.”

In place in all 50 states, Graduated Driver Licensing (GDL) is a three-stage licensing system that has reduced teen crash risk by as much as 30 percent, according to the group. In most states, teens age out of GDL requirements at age 18. However, it’s estimated that one in three teens are not licensed by 18, according to Pam Fischer, principal of Pam Fischer Consulting, the author of the report. “That means that once they do obtain a driver’s license, they’re not reaping the benefits of graduated driver licensing.”

As 18- to 20-year olds are still at a high crash risk, “policy makers need to understand that reaching age 18 doesn’t necessarily equate to mental maturity — which is critical for safe driving,” she said. 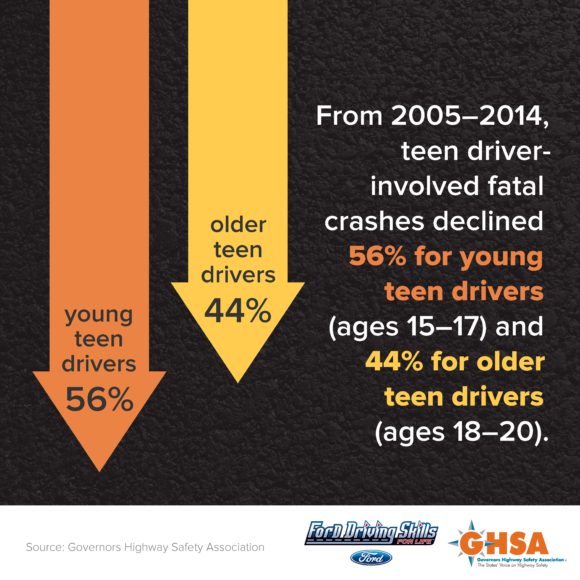 GHSA’s report calls for an expansion of GDL to include all drivers younger than 21 years of age, and provides recommendations for states on increased training of older teen drivers, high visibility enforcement, continued parental involvement, and safe driving programs at colleges.

Some states are weighing these policies. In Maryland, the “Rookie Driver” program requires all novice drivers, regardless of age, to complete 30 hours of classroom and six hours of behind the wheel training. In California, state officials are calling for legislation would expand that state’s GDL to include older teens, while advocates in the state of Washington are expected to unveil a proposal that includes mandatory driver education for older teens, GHSA reported.

The report also discusses the impact of a high visibility enforcement and education campaign in Mississippi, “Pay Attention, Pay a Fine…Stop the Knock,” which uses high school and college presentations and paid and earned media to educate and engage teens, and the Texas-based “U in the Driver Seat” program, a teen-led expansion of the high school peer-to-peer “Teens in the Driver Seat” program. Similar college-level programming is available in California, Ohio, Maryland, Iowa and New York and is increasing student awareness of unsafe driving behaviors and prompting them to protect themselves and their friends.