This week is the anniversary of Superstorm Sandy, which developed in late October and moved over the East Coast starting on Oct. 29, 2012, causing more than $70 billion in damage and killing 280 people.

To mark that anniversary, Climate Central, a nonprofit news organization that analyzes and reports on climate science, has ranked the U.S. cities most vulnerable to major coastal floods.

New York City topped the list, with more than 245,000 people at risk from flooding today, followed by the Florida cities of Miami and Pembroke Pines.

The group also ranked cities based on which have the largest populations that could be threatened in the year 2050 due to sea level rise.

New York still had the greatest number of people living on “threatened land” with 426,000, followed by Hialeah and Miami in Florida. The Sunshine State had 36 cities that placed in the top 50 on that list.

The study also ranked coastal cities by their “high social vulnerability” population, determined using an index that incorporates socioeconomic variables to evaluate the ability of communities to prepare and respond to environmental hazards like floods.

Mike Kreidler, Washington’s insurance commissioner, is getting props for his climate change stance from Architect, the journal of the American Institute of Architects.

The publication conducted a Q&A with Kreidler earlier this month that highlights his efforts both as the state’s commissioner and the chair of the National Association of Insurance Commissioners’ Climate Change and Global warming Working Group to combat climate change and prepare insurers and insureds for more frequent severe weather.

Kreidler has pushed for greater insurer disclosure on climate risk in the past, and has called on insurers to manage their investment portfolios with climate change in mind.

In the Q&A he talks about what a changing climate means for policyholders, whether the insurance industry could manage the financial risks associated with global warming and what if anything architects and designers can do about climate change – to the latter, of course, he spoke about better building codes and resilience.

He was asked by the author of the article, Katharine Keane, whether climate change is impacting insurance policies?

“I don’t think there’s any question that it’s having an impact on insurance rates, and certainly on insurance company behavior,” he told the publication. “There is a reluctance on the part of insurers to insure where they are going to face a significant amount of risk. They are interested in avoiding selling too many policies in an area where the risk is beyond their tolerances. We see that right now in the state of Washington with fire. There is a reluctance by at least one insurer to write more business in areas that are prone to wildfires.”

The Government Accountability Office released a report this week that the costs of disaster assistance programs could be expected to grow at $35 billion a year to 2050 due to climate change.

The report, “Information on Potential Economic Effects Could Help Guide Federal Efforts to Reduce Fiscal Exposure,” suggests that information about the potential economic effects of climate change could inform decision makers about significant potential damages in different U.S. sectors or regions that could help them identify significant climate risks as an initial step toward managing such risks. 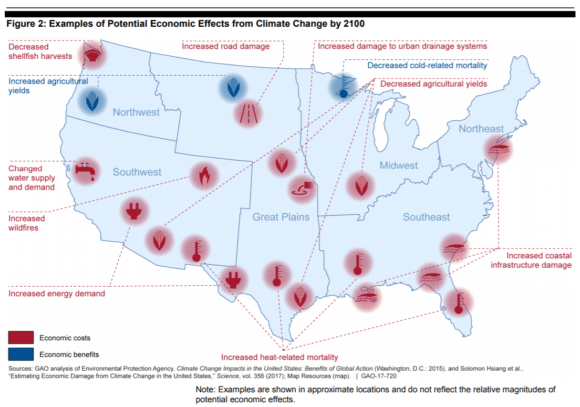 The findings are consistent with National Academies leading practices, which call for climate change risk management efforts that focus on where immediate attention is needed.

The study is outlined in a letter sent to Congresswoman Maria Cantwell, the ranking member of the Committee on Energy and Natural Resources, and Senator Susan Collins.

The letter states in part:

“According to the President’s budget proposal for fiscal year 2017, over the last decade, the federal government has incurred direct costs of more than $350 billion because of extreme weather and fire events, including $205 billion for domestic disaster response and relief; $90 billion for crop and flood insurance; $34 billion for wildland fire management; and $28 billion for maintenance and repairs to federal facilities and federally managed lands, infrastructure, and waterways. According to a May 2014 assessment by the U.S. Global Change Research Program (USGCRP), the impacts and costs of extreme events—such as floods, drought, and other events—will increase in significance as what are considered rare events become more common and intense because of climate change.”

Scientific American is weighing in on whether climate change had anything to do with the recent spate of monster hurricanes.

An article published on Thursday bears the subheadline: “Global warming already appears to be making hurricanes more intense,” and it asserts that experts are getting a sense of what our warming world might mean for monster storms in the U.S. and worldwide.

Since 1981 the maximum wind speed of the most powerful hurricanes has risen because higher ocean heat provides more energy for storms, fueling their intensity, according to the article.

“The dynamic between storms and warming oceans occurs in part because of the role hurricanes play in our climate system: they rebalance Earth’s heat,” the article states. “The storms remove heat from tropical oceans in the form of moisture and pump the heat up into the atmosphere, where heat is redistributed and radiated out into space.”

The article notes that many experts predict a potential drop in overall numbers of hurricanes in a warmer climate, but that the number of very intense storms may actually grow, with some studies showing that globally there could be more storms at the high end (category 4 and 5).

Experts interviewed in the article also believe higher ocean temperatures may mean storms will become both bigger in size and last longer.