In the wait for self-driving technology, cell-phone toting tech bros may have to cede their spot in line to pizzas, Craigslist couches and the mounting ephemera of e-commerce.

The future—at least in the near-term—will not only be driverless, but sans passenger as well.

The early conversations around driverless cars have focused on robot taxis because taking the human driver out of a cab seemed like the quickest path to profitability. But an increasing number of companies—automakers, tech giants, startups, parcel services—are seeing autonomous delivery as the more lucrative venture.

There is no driver or pizza delivery person to get the goods from the vehicle to the front door.

And no wonder: The potential market is huge. Consumers now favor shopping online to schlepping to the mall, with Amazon.com Inc. alone delivering more than 5 billion packages to its Prime members last year. Automating the arrival of all those brown boxes on front porches would slash shipping costs in half, experts say. That’s why consultant McKinsey & Co. predicts that in less than a decade, 80 percent of all items will be delivered autonomously.

“The level of interest around autonomous goods delivery has gone up dramatically,” said Asutosh Padhi, a McKinsey senior partner. “The economics will be compelling and it will change consumer expectations in a fundamental way.”

Automated delivery has plenty of advantages over robo-taxis, starting with fewer safety concerns about hauling cargo instead of humans. And unlike ride hailing, driverless delivery is not dependent on the morning and evening rush when cabs are busiest. Delivery demand exists 24/7 and works best in the dead of night when there’s scant traffic on the road. A robot that works almost all the time could cut two-day delivery into two hours. And a utilitarian delivery pod, which doesn’t need seats or creature comforts for occupants, can maximize return on investment.

“The business potential is so large,” said Daniel Laury, chief executive officer of Udelv, a Silicon Valley startup that began demonstrating driverless delivery of groceries in January. “You’re talking about hundreds of billions of dollars.” 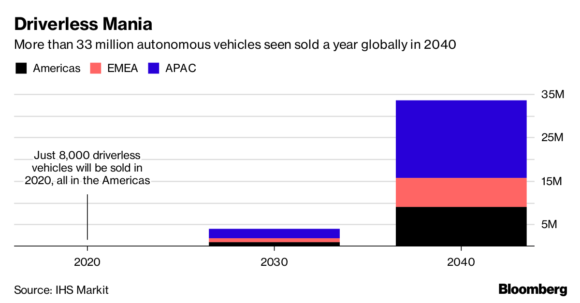 With so much money on the table, the nascent business is attracting the interest of global automakers and tech giants alike. This week, Waymo, the former Google self-driving car project, begins testing autonomous big rigs hauling cargo in Atlanta. Ford Motor Co. just began a pilot in Miami to understand how self-driving cars and vans would deliver pizza, groceries and other goods. Germany’s Daimler AG has shown its autonomous Freightliner Inspiration truck and Tesla Inc. has teased a self-driving semi as logistics companies seek to eliminate human drivers that account for as much as 70 percent of the cost of hauling goods.

And that’s not all. Toyota Motor Corp. in January unveiled a concept for an autonomous vehicle that can haul people or cargo, while Renault-Nissan will debut a driverless delivery vehicle at the Hanover Motor Show in September. Big logistics players from Germany’s Deutsche Post to Amazon itself are also planning their own driverless delivery futures.

“The Amazon effect has really changed how commerce is done,” said Danny Shapiro, senior director of the automotive business at chip maker Nvidia Corp., the computing brains behind driverless vehicles from more than 320 companies including Daimler AG’s Mercedes-Benz. “It has caused a huge growth in the number of packages being delivered, which is why we’ll ultimately move toward a driverless delivery system.”

Here’s how short-haul robot delivery might work, according to those creating it: You order an item online or on your phone and specify a window of time for it to be delivered to your home or office. As the package nears its destination, you get an alert telling you to come to the curb to retrieve your merchandise from a locked compartment in the vehicle. You unlock it with a code punched into a touchpad on the side of the vehicle or by scanning a barcode texted to your phone.

“It’s like an Amazon locker on wheels,” Shapiro said.

This, though, highlights the biggest weakness in the driverless delivery scenario: There is no driver or pizza delivery person to get the goods from the vehicle to your front door.

Eventually, drones or sidewalk robots may close the gap, but for now, consumers will have to pad out to the curb.

“That’s part of what we’re learning,” said Sherif Marakby, Ford’s vice president of autonomous vehicles and electrification, who is overseeing its Miami test. “We’re looking at the willingness of the customer to come down and pick up their goods.”

In a test Ford conducted with Domino’s Pizza last fall in Ann Arbor, Michigan, consumers were eager to come out to the car, which spoke in a soothing voice that walked them through the process. (Some human subjects found themselves talking back.)

“In the early days, people are just fascinated with the technology,” Jim Farley, Ford’s president of global markets. “In Ann Arbor, I’m sure we had people who just wanted to see how it would work, out of curiosity as well as being hungry.”

Autonomous delivery may first appear on the highway, as long lines of big rigs “platoon” in unison in their own lane, McKinsey’s Padhi said. Humans will be on board initially, but they will not be driving, just monitoring. Unlike today, the trucks are likely to travel in the left lane so they don’t block exits or on-ramps for regular drivers. And the platooning truck lane may be blocked off with concrete barriers for safety.

“Many states have laws on the books that will need to be amended for platoon operations,” said Jim Barbaresso, national practice leader for intelligent transportation for consultant HNTB Corp. “These laws have been on the books for close to a century for farm to market, two-lane roadways.”

For short hauls around town, autonomy may first appear as “follow me” technology, where a delivery truck can drive itself around the block to meet up with the driver who has been dropping off packages throughout a neighborhood.

“It makes the human delivery person more efficient,” said Nvidia’s Shaprio, who demonstrated the technology in Germany last year with Deutsche Post subsidiary DHL. “Instead of starting and stopping to move house by house, the driver can grab packages and make deliveries while the van follows along with them.”

Ultimately, the neighborhood delivery pod might look like the giant toaster-shaped vehicle introduced by Nuro, a Silicon Valley startup led by two former members of Google’s self-driving car program. The 1,500-pound pod is battery powered, putters at low speeds and has a customizable interior that can carry about 250 pounds of cargo. Best of all: No human occupant is at risk if the robot goes wrong.

“Almost all the big players in self-driving have a critical interest in getting passenger self-driving right because to them, it’s an existential threat,” said Dave Ferguson, Nuro’s CEO. “Whereas, for us, there are just some things we don’t need to worry about.” 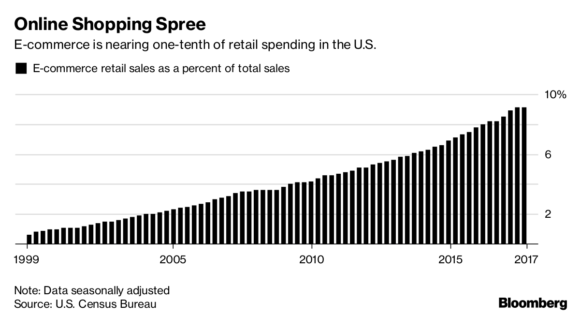