Goldman Sachs Group Inc.’s asset-management unit, which oversees $250 billion for insurers, said an economic slowdown in the U.S. is the biggest investment risk for the industry for the first time since the financial crisis.

“Insurers expressed a growing consensus that we are in the late stage of the U.S. credit cycle,” the Goldman unit said in a report following a survey of 300 senior insurance executives. “With rates expected to rise and equity valuations high, insurers are concerned with achieving adequate returns without leaving their portfolios exposed in the event of a downturn.”

Inflation expectations have also risen in the U.S. as rising protectionism damps prospects for global growth, adding to the concerns about the economy. That could be a double whammy for insurers, cutting the value of their portfolios in the short term and probably increasing the claims paid by non-life insurers over the long term.

In 2017, “people were expecting inflation to become an issue in five years,” Etienne Comon head of insurance in the Europe, the Middle East and Africa at Goldman Sachs Asset Management, said at a media briefing. “Now this has been brought forward — more view inflation becoming an issue within the next two to three years.”

Executives plan to cut risk in equities and credit, increase liquidity in their portfolios and reduce the duration of their exposures as interest rates rise, the survey shows. High-yield debt, tax-exempt municipal bonds and U.S. equities are among the investments that managers plan to decrease. Infrastructure debt, commercial mortgage loans and corporate credit for mid-market firms are areas where they want to allocate more capital.

Cryptocurrencies, while being much debated, are not believed to be suitable investments for portfolios at this stage, while a third of those surveyed view them as a potential risk to financial markets. 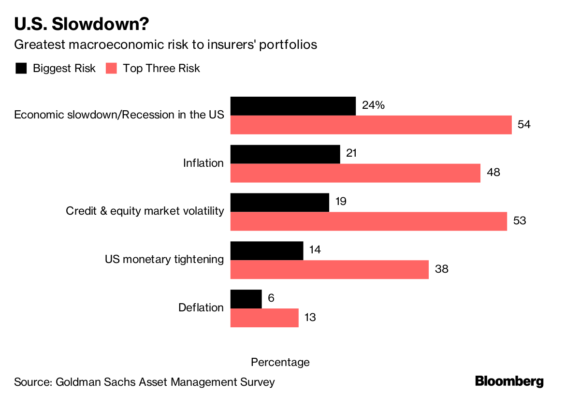