When Carla Jordan and her husband were hit with a cascade of serious medical issues, she knew that at least her family had health insurance through her job. What she didn’t realize was that even with that coverage, a constant stream of medical bills would soon push the family to the edge of financial collapse.

The Jordans, both 40, were once solidly in the middle class, but ever since the 2008 financial crisis, money has been tight at best. Then calamity hit. In 2016, Carla needed a gallbladder operation. Her husband John suffered a seizure the same year, followed by an unrelated infection that sent him to the emergency room. Toward the end of the year, Carla was diagnosed with diabetes. Even after paying $501 a month for medical insurance, they ended the year owing $8,000 to 18 different providers, with creditors threatening to garnish John’s wages.

Health plans similar to the Jordans’ that put patients on the hook for many thousands of dollars are widespread and growing, but some employers are beginning to have second thoughts.

“Why did we design a health plan that has the ability to deliver a $1,000 surprise to employees?” Shawn Leavitt, a senior human resources executive at Comcast Corp., said at a conference in May. “That’s kind of stupid.” A handful of companies, including JPMorgan Chase & Co. and CVS Health Corp., have recently announced plans to reduce deductibles or cover more care before workers are exposed to the cost.

Yet it’s still the reality for a growing share of Americans. Today, 39 percent of large employers offer only high-deductible plans, up from 7 percent in 2009, according to a survey by the National Business Group on Health. Half of all workers now have health insurance with a deductible of at least $1,000 for an individual, up from 22 percent in 2009, according to data from the Kaiser Family Foundation. About 41 percent say they can’t pay a $400 emergency expense without borrowing or selling something, according to the Federal Reserve. The bottom line: People like the Jordans simply can’t afford to get sick.

The family had an Anthem Inc. insurance policy through Carla’s job as a public school teacher in Stafford County, Virginia. But the monthly premium barely covered any of their bills before paying a $2,000 deductible. And by the end of 2016, the Jordans were deep in the hole to doctors, hospitals, an anesthesiologist, urgent care, and various labs and testing centers. Their doctors sent collections notices. Some dropped them as patients until they paid up.

“I actually dreaded going to the mailbox,” Carla recalled. “I feel like I’ve done everything I’m supposed to do.” And yet, she said, sickness pushed the family “right over the brink.” 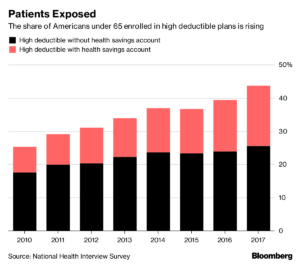 Since the early 2000s, employers have mostly embraced high-deductible health plans. The thinking has been that requiring workers to shoulder more of the cost of care will also encourage them to cut back on unnecessary spending. But it didn’t work out that way. In the wake of the 2008 financial crisis, many families were hard-pressed to meet their soaring health-insurance deductibles. At the same time, studies show that many put off routine care or skipped medication to save money. That can mean illnesses that might have been caught early can go undiagnosed, becoming potentially life-threatening and enormously costly for the medical system.

How the U.S. insurance system came to stick its customers with increasingly onerous medical bills is a 15-year-long story of miscalculations and missed opportunities. It started in 2003 when President George W. Bush and congressional Republicans passed a change to the tax code that encouraged employers to experiment with high-deductible plans. The trend got a push when the financial crisis hit: As the economy stalled and employers shed nearly 9 million jobs over three years, companies desperate to slash costs turned to high-deductible plans to save money. The next wave came with the arrival of Obamacare in 2010. Millions who were previously uninsured could now get coverage, but many of them took on deductibles of $1,000 or higher.

The Jordan family never expected to become a casualty of the trend. Little more than a decade ago, they were making more than $100,000 a year. John Jordan had a carpentry business that did well during the housing boom. Carla’s job teaching computer science classes at a local high school gave them steady income and health benefits. When their children, now teenagers, were first born, she recalls paying $500 for her maternity stays in the hospital.

“That was the biggest bill we ever got,” she said.

Since then, Carla’s salary has barely increased and John’s business never recovered after the crash. With student loans, car notes and a house worth less than their mortgage, the Jordans filed for bankruptcy in 2013, allowing them to discharge some debts. But their income never fully bounced back. 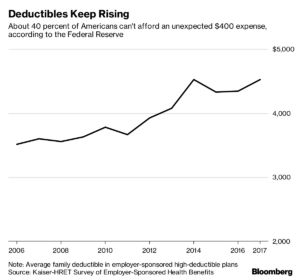 They were ill-prepared to deal with sharply escalating health-care bills: Carla’s gallstone, her diabetes diagnoses, John’s seizures, followed by a serious campylobacter infection. The family couldn’t afford the $1,000 it would cost for Carla’s six-week diabetes class. Instead, she got a 40-minute crash course. They shelled out $125 for five pills to treat John’s infection. Still, the bills were piling up. Early in 2017, Carla took a day off from work to go through the stacks of paper, calling each office to negotiate. Few were willing to help.

“It did not really matter to them,” she said. “It was just, ‘When can you pay and how much can you pay?'”

By last year, the couple was making about $79,000, before taxes. They have no savings for retirement or for their children to go to college. “We both live paycheck-to-paycheck,” Carla said. They pay about $35 a month for medications for John’s blood pressure and acid reflux. Carla takes inexpensive metformin—just $3 a month—for diabetes, and doesn’t yet need insulin.

But her diabetes test strips and lancets cost $120 for a three-month supply. To stretch them as long as she can, she checks her blood sugar only when she feels dizzy or nauseous, rather than the standard three times a day. When she had the flu this past winter, she put off going to the doctor until her fever hit 105.

The Jordans’ response to spiraling family medical costs is repeated in families across the country, studies suggest. When one large employer switched all its employees to high-deductible plans, medical spending dropped by 12 percent to 14 percent, according to an analysis by economists at University of California, Berkeley and Harvard. But the workers weren’t learning to shop more effectively for health care. They simply reduced the amount of medical care they used, including preventative care. In high-deductible plans, women are more likely to delay follow-up tests after mammograms, including imaging, biopsies and early-stage diagnoses that could detect tumors when they’re easiest to treat, according to research in the Journal of Clinical Oncology.

“High-deductible plans do reduce health-care costs, but they don’t seem to be doing it in smart ways,” said Neeraj Sood, director of research at the Leonard D. Schaeffer Center for Health Policy and Economics at the University of Southern California.

Some big companies are sitting up and taking notice. “We all thought high deductibles are going to drive people to get involved—’skin in the game,'” Jamie Dimon, the chief executive officer of JPMorgan, said in early June. Instead, “they didn’t get the surgery they needed, when they needed it, because they can’t afford the high deductible in one shot.” JPMorgan is effectively eliminating deductibles for workers making less than $60,000 a year.

Dimon has teamed up with the top executives of Amazon.com Inc. and Berkshire Hathaway Inc. to improve the health care they provide for their workers. The incoming CEO of that venture, surgeon and journalist Atul Gawande, has also noticed the plight of such families as the Jordans. “I had one friend who was bankrupted with a health plan,” Gawande said at the Spotlight Health event in Aspen, Colorado, on Saturday. “He had a $3,000 deductible and couldn’t meet it.”

About five years ago, CVS switched all of its 200,000 employees and their families to health-insurance plans with high deductibles. As the company pushed more costs onto employees, some stopped taking their medications.

“Nobody in their right mind would think that it’s a smart thing to basically be keeping people away from taking their medications,” said Troy Brennan, the chief medical officer at CVS. The company had initially offered a limited selection of generic drugs for free to its workers. But evidence that people were skipping medications prompted CVS to broaden the list, including some brand-name treatments and insulins on the free-drug list, an approach it now recommends to its corporate customers.

The company is also studying a plan to allow employers to offer free, branded drugs to workers in cases where CVS has already negotiated deep discounts. The plan could be in place as soon as 2019.

For the Jordans, such changes are late in coming. On New Year’s Day, 2017, Carla Jordan sat down with her laptop at her kitchen table to write a 20-page letter railing against insurance companies and high medical costs, replete with tables showing their expenses and eight pages of references. She pointed out that health insurance companies’ stock prices, not to mention industry executive salaries, were both soaring, while the thousands of dollars in premiums she paid protected neither her family’s health nor its finances.

“This is an urgent situation, with dire consequences,” she wrote. “Please take action immediately.” She sent the letter to then-President Barack Obama, President-Elect Donald Trump and 220 members of Congress. Only four responded. Seven months later—and for the second time in four years—the couple filed for bankruptcy.