How big is the gig economy? The answer depends on how one defines “gig economy.”

Because there is no broadly accepted definition and no straightforward way to classify workers or jobs as “gig” or “not gig,” this report will focus on one sector that has grown because of gig-enabling technologies: ridesharing.

One common example of the gig economy is driving for a ridesharing service such as Uber or Lyft. Drivers who work for those types of companies are self-employed in NAICS industry 4853 “Taxi and Limousine Services.” Self-employed drivers in this industry also include people who drive for traditional taxi companies.

The figure below shows the number of self-employed taxi drivers from 1997 to 2016. These data are from the Nonemployer Statistics published by the U.S. Census Bureau. 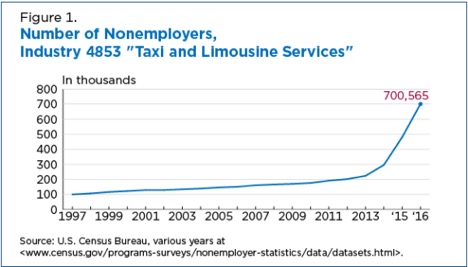 Nonemployers are defined as businesses that have no paid employees, are subject to federal income tax, and have receipts of $1,000 or more ($1 or more for the Construction sector). Most nonemployers are self-employed individuals who operate unincorporated businesses, which may or may not be the owner’s principal source of income.

The table below is from a research paper by Katharine Abraham and John Haltiwanger of the University of Maryland, and Kristin Sandusky and James Spletzer of the Census Bureau.

These researchers attached demographic characteristics to the nonemployer data and information on whether nonemployers had wage and salary earnings in addition to their self-employment earnings. They also identified persons who were self-employed taxi drivers in both 2012 and 2013, which they define as incumbents, and newcomers to the taxi-driving industry in 2013, 2014 and 2015.

“We see large differences in who was an incumbent and self-employed taxi driver in 2013 versus who is entering the industry in the past several years,” Spletzer said. “The incumbents in 2013 were mostly male and foreign-born, and only 18 percent had a wage and salary job in the same year.”

Those who are newer to the industry have very different characteristics.

“In contrast to the 2013 incumbents, those new to the industry in 2015 were more likely to be female, less likely to be foreign-born, and 73 percent had a wage and salary job in the same year,” Spletzer said.

Earnings differences, combined with the difference in the percentage who have a wage and salary job, could suggest that newer drivers worked part time. Many of the incumbents in 2013 likely worked full time.

“All of this suggests that the rapid growth of ridesharing apps on smartphones has led to a dramatic growth in the number of self-employed persons driving on a part-time basis,” Spletzer said. “This is a prime example of technology lowering the barriers to entry and affecting how individuals earn money in the labor market.”

Kristin Sandusky is a research economist for the Longitudinal Employer-Household Dynamics (LEHD) program at the Center for Economic Studies (CES) at the U.S. Census Bureau.