An online pharmacy told U.S. regulators it found another cancer-causing chemical in widely prescribed blood-pressure pills, raising new questions about a complex global web of companies that produces medicine for millions of people.

A solvent called dimethylformamide was discovered in the drug valsartan made by several companies, including Swiss pharmaceutical giant Novartis AG, according to a filing last week to the Food and Drug Administration by New Haven, Connecticut-based Valisure.

DMF, as the solvent is known, is classified by the World Health Organization as a probable carcinogen.

Dozens of forms of generic valsartan have been recalled since July 2018, when the carcinogenic chemical N-Nitrosodimethylamine, or NDMA, was detected in a version of the drug made by a Chinese company. Valsartan is a decades-old treatment for hypertension that is frequently combined with other medicines into a single pill.

Valisure found DMF in valsartan that is still on the market in the U.S., including in medicines the FDA had highlighted as alternatives to recalled drugs. The findings could complicate the agency’s efforts to pull tainted drugs from pharmacies while informing doctors and patients which medications are safe. DMF is the fourth potential carcinogen to be found in batches of the heart pills.

Some drugmakers whose pills tested positive for DMF said that neither they nor the outside companies that produce active ingredients for their drugs use the solvent, though some indicated they don’t have complete visibility into their supply chain.

“Novartis cannot currently fully exclude the possibility that traces of DMF (within acceptable limits) may have been present in materials” provided to their suppliers, said Novartis spokesman Eric Althoff in an email.

The FDA is investigating how the recalled medications were contaminated. The possibility that the use of DMF in the manufacturing process led to chemical reactions that formed the other carcinogens has been raised by regulators.

The agency will evaluate Valisure’s study, said spokesman Jeremy Kahn. Patients should keep taking their blood-pressure medication even if it is recalled, the FDA says, until they can talk to their doctor. Suddenly stopping such drugs could cause harm.

Valisure’s findings suggest the manufacturing of drugs may be more porous than commonly understood.

“Medicines are kind of like used cars: By the time you get it it’s already five or six years old, it’s touched hundreds of hands and it’s got 100,000 miles on it,” Valisure Chief Executive Officer David Light said in an interview.

When drugs are made, the initial raw materials may need to change form before they go into a pill. To break them down, a solvent like DMF may be used, but it’s supposed to largely vanish by the time a pill is put into a bottle for sale. DMF is cheaper than some other solvents, making it appealing for companies coping with the bruising economics of the generic-drug business.

The FDA allows drugs to contain the equivalent of about 8.8 million nanograms of daily exposure to DMF. The agency last revised its allowable solvent levels in 2017; the WHO classified DMF as a probable carcinogen in 2018.

Valisure found DMF in valsartan made by five of the six drugmakers it tested, including Novartis, which makes the brand-name version called Diovan. That drug was first approved in the U.S. in 1996. Diovan’s DMF levels were among the lowest that tested positive.

Novartis doesn’t use DMF in making Diovan and documents provided by suppliers it purchases ingredients from indicate that they don’t, either, said spokesman Althoff. But companies that its suppliers buy from could.

Lawyers for plaintiffs, including 34 people and insurers that paid for contaminated drugs, filed a class-action complaint Monday claiming that Zhejiang Huahai’s actions constitute “an explicit effort to conceal and destroy evidence and to willfully and recklessly introduce adulterated and/or misbranded” valsartan into the market. A Bloomberg News investigation this year detailed efforts at the company to manipulate data and ignore warning signs that their drugs didn’t meet U.S. standards.

Plaintiffs’ attorneys also filed a separate class-action complaint on behalf of patients who took contaminated valsartan and are seeking payment for medical monitoring for everyone who took the tainted drugs.

Valisure filed a citizen petition to the FDA Thursday asking it to lower the amount of DMF allowed in pharmaceuticals and to recall the valsartan found to contain high DMF levels. Valisure runs an FDA registered facility and its results were verified by Emery Pharma, an FDA-registered research lab in Alameda, California.

Valisure asked the FDA to cut allowable DMF to fewer than 1,000 nanograms daily, possibly to as low as the 96 nanograms of NDMA the agency allows, given the similarities between the chemicals. NDMA is commonly found in cooked, cured or grilled meat, such as bacon.

The FDA follows internationally agreed upon guidelines for permitted daily exposure to residual solvents, said Kahn, the agency spokesman. He didn’t say why the DMF guidelines hadn’t been revisited since the WHO carcinogen classification.

If DMF were present in valsartan that also contained NDMA, that could exacerbate the cancer risks, according to Valisure. This blood pressure site has grown a lot in scope and size since I first started producing it so, if you are visiting for the first time, here’s a review of what’s available.Blood pressure treatment can seem confusing and the range of options available for anyone with high blood pressure grows day by da. One of them is blood balance You or your doctor may choose to treat your blood pressure by medication, by lifestyle advice, by altering your diet or by doing all of these things and more.Discover how weight loss lowers blood pressure and find out if changing your diet will improve your heart health. Its tests detected DMF in valsartan alone and in pills where it was combined with a blood-pressure drug called hydrochlorothiazide.

For every 8,000 people who took the highest dose of valsartan contaminated with NDMA, there would be one additional case of cancer, the FDA has estimated. In standalone and combined forms, valsartan has been a go-to therapy for cardiovascular issues for a generation.

Alembic doesn’t use DMF in its manufacturing process, according to spokesman Ajay Desai, who said the contamination likely occurred during analysis. A representative for Macleods couldn’t be reached for comment. 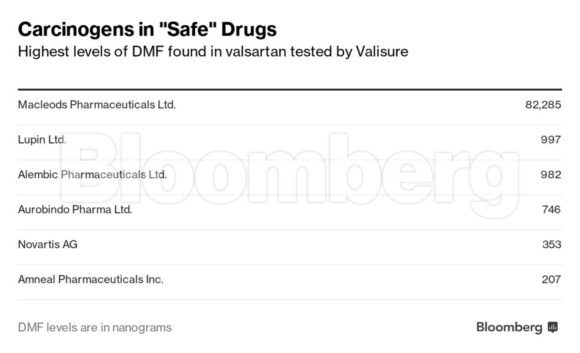 According to the assessments that it has posted online, the FDA hasn’t yet screened valsartan that Valisure tested from Aurobindo Pharma Ltd., Lupin Ltd. and Novartis.

Representatives for Aurobindo and Lupin didn’t respond to requests for comment.

The agency’s testing is based on particular batches of drugs, said spokesman Kahn. “The FDA is committed to ensuring adequate and safe supply” of valsartan and other drugs, he said.

The FDA doesn’t regularly test pharmaceuticals, relying instead on companies to ensure that medicines work and are safe.

In the wake of the recalls, the American Medical Association last week decided to assess over the next year whether more needs to be done to protect the U.S. drug supply, including possible independent testing.

“I think we make assumptions that drugs, once they’re approved by the FDA or once they’re on the market for patients, that they’re OK and they’re all the same,” said Suma Thomas, a cardiologist at the Cleveland Clinic who pushed for the study. “We need more knowledge.”