Facebook Inc. will pay a record-breaking $5 billion fine to resolve a government probe into its privacy practices and the social media giant will restructure its approach to privacy, the U.S. Federal Trade Commission said on Wednesday.

The FTC voted 3-2 along party lines to adopt the settlement, which requires court approval, even as Democrats said the settlement did not go far enough or require a large enough fine.

“Despite repeated promises to its billions of users worldwide that they could control how personal information is shared Facebook undermined consumers’ choices,” said FTC Chairman Joe Simons, a Republican, in a statement.

But Democratic FTC Commissioner Rohit Chopra said the penalty provided “blanket immunity” for Facebook executives “and no real restraints onFacebook’s business model” and does “not fix the core problems that led to these violations.”

The FTC said that Facebook’s data policy was deceptive to “tens of millions” of people who used Facebook’s facial recognition tool and also violated its rules against deceptive practices when it did not disclose phone numbers collected to enable a security feature would be used for advertising.

Chopra and Democratic FTC Commissioner Rebecca Slaughter, who opposed the settlement, said the $5 billion penalty may be less than Facebook’s gains from violating users’ privacy.

“Until we address Facebook’s core financial incentives for risking our personal privacy and national security, we will not be able to prevent these problems from happening again,” Chopra said. 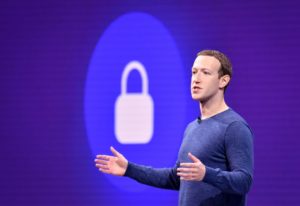 The Republican commissioners led by Simons said if the FTC had gone to court “it is highly unlikely that any judge would have imposed a civil penalty even remotely close to this one.”

They called the settlement — in light of what the FTC might have been able to win in a court fight — “a complete home run.”

The Republican majority noted that Zuckerberg and other company executives will have to sign quarterly certifications attesting to the company’s privacy practices.

The FTC said Zuckerberg or others filing a false certification could face civil and criminal penalties.

Facebook is barred from using telephone numbers obtained in a security feature, like two-factor authentication, for advertising and must get user consent if it plans to use data from facial recognition technology.

The settlement stems from the company’s alleged violations of a 2012 FTC settlement order over privacy issues.

Slaughter said the FTC should have taken Facebook and Zuckerberg to court.

Slaughter also criticized the FTC’s decision to grant Facebook and its executives a release from liability for any claims that prior to June 12, 2019 it violated the FTC 2012 settlement as “far too broad” and said the FTC failed “to impose any substantive restrictions on Facebook’s collection and use of data from or about users.”

Chopra added that by “settling the commission — and the public — may never find out what Facebook knows… It is difficult to conclude that the commission got the better end of the bargain.”

The FTC also said Wednesday that Cambridge’s former CEO Alexander Nix and former app developer Aleksandr Kogan, who worked with the company, had agreed to a settlement with the FTC that will restrict how they conduct business in the future.

The settlement comes a day after the U.S. Justice Department said on Tuesday it was opening a broad investigation of major digital technology firms into whether they engage in anticompetitive practices, the strongest sign the Trump administration is stepping up its scrutiny of Big Tech.

The review will look into “whether and how market-leading online platforms have achieved market power and are engaging in practices that have reduced competition, stifled innovation, or otherwise harmed consumers,” the Justice Department said in a statement.

The Justice Department did not identify specific companies but said the review would consider concerns raised about “search, social media, and some retail services online” — an apparent reference to Alphabet Inc, Amazon.com Inc. and Facebook Inc., and potentially Apple Inc.