Extended development from North American hurricane losses and losses from non-peak perils like California wildfires have finally jolted reinsurers out of a soft reinsurance market, according to a report from reinsurance broker Guy Carpenter.

The report titled “The Changing Nature of Risk, released during the Rendez-Vous de September in Monte Carlo, also notes that most significant insurance and reinsurance cycle turns have historically begun on the liability side rather than the property side of the property/casualty market—with loss reserve deficiencies playing a major role. A liability turn isn’t far off, the report suggests, noting that P/C insurance carriers may now be in a “danger phase” with respect to loss reserving.

With these types of changes challenging existing underwriting assumptions and forcing carriers and reinsurers to reassess their views of risks, further reassessments will be needed in the future, the report says, pointing to the impacts of climate change on the property side and technological change on the casualty side of the markets.

Changing risk views, the report says, are coming about not because of the absolute magnitude of losses but because they are evolving differently than expected. Indeed, property reinsurance pricing reactions were “muted” in 2018 and early 2019 even though 2017-2018 was the costliest two-year period ever for insured catastrophe losses, according to the report.

The magnitude of loss creep for virtually every major peak peril loss sustained in the last two years has surprised the market, and losses continue to develop adversely.

But “the magnitude of loss creep for virtually every major peak peril loss sustained in the last two years has surprised the market, and losses continue to develop adversely,” Guy Carpenter’s report says, providing a graphical illustration of Hurricane Irma claims (based on PCS data) that shows aggregate claims 34 percent higher 700 months after the event vs. 200 months post-event.

“No other hurricane loss in recent history has developed adversely to the duration and extent of Irma. In fact, loss creep from Irma, as well as other 2017 losses, has been one of the more significant ‘events’ to impact the sector over the last year or so, with reinsurance carriers incurring the bulk of the incremental costs,” the report says. 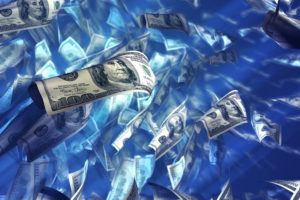 Even for Hurricane Michael, a storm that only made landfall in the Florida Panhandle in October 2018, recent PCS estimates show that losses have developed adversely by about 45 percent above initial expectations, the report says.

“The accumulation of losses from a range of diverse natural catastrophe perils in 2017 and 2018 has brought an end to years of soft (re)insurance market conditions,” the report says, adding information on non-peak property perils like wildfires in 2017 and 2018. Losses from wildfires in California for these two years alone ($25 billion) surpassed the combined costs of any previous 10-year period. Describing this as “a striking statistic,” the report also shows global wildfire losses by decade starting in 1970, with less than five events, and more than 25 for the (incomplete) decade 2010-2018.

“Such outsized losses are not commensurate with a view of risk that has traditionally considered wildfire to be an attritional or [secondary] peril,” the report says, noting previous carrier and reinsurer strategies of spreading premium globally and allocating capital to non-correlated zones are now less successful.

The spectre of climate change can only make things worse, the report suggests, noting that “sustained trends around increased wildfire activity and stalling hurricanes are thought to potentially have some link to the changing climate.”

The Guy Carpenter report specifically mentions an end to the soft market, but the writers do not use the term “hard market” at any point. Instead, it describes a “market in transition” and “tailored approaches” to pricing and capacity decisions.

At one point, for example, the report delivers this description of midyear 2019 renewals: “At the Florida property catastrophe renewal on June 1, …differentiation between programs was significant and produced one of the broadest ranges of price change that Guy Carpenter has tracked for a single region. This systematic approach represents a strong and stable market that is experienced in navigating market-changing events and unwavering in supporting buyers through difficult times.”

In a similar vein, an executive summary to the report predicts that “a more sophisticated and tailored approach to renewals is likely to prevail over the volatile and often indiscriminate reinsurance rate movements of the past, as reinsurers scrutinize cedents’ performance and loss experiences and allocate capacity accordingly.”

A section of the report is devoted to reinsurance and insurance rate movements of past market cycles and following shock events. Included are a description of the bifurcated post-Katrina market that saw reinsurance rates jump while insurance prices remained stable and the bigger post-9/11 jolts in both markets when carriers and reinsurers were forced to “reset their perceptions” of unforeseen property and liability risks.

According to Guy Carpenter’s review of market cycles, “Factors such as reserving (in)adequacy and macroeconomic developments…play a more prominent role in driving primary pricing, although exceptional catastrophe events that challenge conventional views of risk are still capable of exerting significant upward pressure.”

In a section on “lurking long-tail threats,” the report describes a combination of social inflation, loss potential associated with opioid addiction, an uptick in securities class actions, increased claims severity and frequency in commercial auto and general liability lines, all of which are becoming regular topics on carrier earnings calls and in their investor presentations, as well. (Related article: “GL Will Be Next Line to Harden, Berkley Says.”)

In addition “growing instances of adverse reserve development are starting to squeeze carriers’ margins in a number of liability classes,” the report says. Guy Carpenter goes on to analyze instances of the opposite reserving behavior—continued reserve takedowns for prior years. The analysis “implies that the sector may be in a danger phase in which carriers are continuing to release reserves even as accident-year experience indicates that redundancies are diminishing.”

“The overriding trend” in recent years, however, is one of fewer carrier reserve releases, perhaps reflecting a “deteriorating claims environment,” the report says. “At the very least, our proprietary research indicates that carriers can no longer rely on reserve redundancies to protect or enhance profits as they have done since the mid-2000s.”

And, as the property section of the report indicates, they may no longer rely on property insurance margins to subsidize casualty losses.

The report reviews statistics on wildfire and stalling hurricanes in some detail, more than hinting at the causal impact of climate change. There’s no solace to be found on the liability side of the business, the report notes, imparting some statistics about technology risks that might give cyber insurers and reinsurers pause. Perhaps the most stunning is one the Guy Carpenter attributes to Jaguar Land Rover, suggesting that one billion lines of code are needed to run genuinely autonomous cars. Combining this estimate with some technology industry averages that suggest there are 15-50 errors per 1,000 lines of code, Guy Carpenter suggests that there are 15-50 million potential errors—or 15-50 million access points for hackers.

Robert Bentley, CEO, Strategic Advisory at Guy Carpenter, commenting on the evolution of the risk and reinsurance landscape overall in a media statement said: “Insurability is likely to become a key challenge for the sector as there is a dearth of data and modeling solutions for many new exposures. There are even questions around the insurability of some established risks, given that the long-term trends associated with climate change remain difficult to measure, predict and, ultimately, model.”

As for the more immediate future, Bentley said: “After years of strong capital growth, the reinsurance market has been resilient to these losses and conditions remain largely favorable to cedents. But as recent developments have shown, events that challenge underwriting risk assumptions can still impact capacity deployment.”

Other sections of the report review changes in buying behaviors (recently on the increase again), reinsurance sector capital (including the 150 percent rise in alternative capital between 2012 and 2018 and the impact of loss creep in curtailing ILS investor capacity more recently), the strength of primary carrier balance sheets, and the performance of catastrophe models (which underestimated losses from Hurricanes Florence, Michael and Maria).

This article was originally published by Carrier Management, the publication for P/C insurance carrier C-suite executives.