United Parcel Service Inc. on Tuesday said it won the U.S. government’s first full approval to operate a drone airline, which gave it a lead in the nascent U.S. drone delivery business over rivals Amazon.com Inc. and Alphabet Inc.

The Federal Aviation Administration (FAA) granted UPS’ Flight Forward drone subsidiary a Part 135 Standard certification on Friday. The company said the certificate allows it to expand its delivery service in campus settings such as hospitals and universities, but added that residential deliveries are years away.

The certification allows UPS pilots to fly drones beyond their line of sight and opens the door for the delivery company to expand Flight Forward. The fledgling unit is immediately doubling the number of drone flights it does for its flagship customer, Raleigh, North Carolina’s WakeMed Health & Hospitals.

“We’ll easily get to 20-plus flights per day, per drone,” said Scott Price, UPS’ chief strategy and transformation officer.

“It’s a business, it’s not a prototype or a test,” Price said of Flight Forward, which ferries blood and tissue samples to WakeMed’s central laboratory from points around its main hospital campus.

UPS said its latest certification clears the way for Flight Forward to add other campus delivery projects without seeking government approvals for each one.

“There are hundreds of campuses in the United States,” said Price, who added that UPS is eyeing drone deliveries on hospital, corporate and university campuses as it builds Flight Forward. 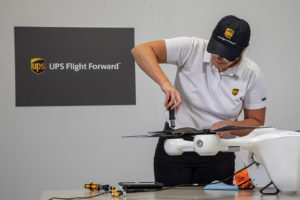 Earlier this year, Alphabet’s Wing, the sister unit of search engine Google, was the first company to get U.S. air carrier certification for a single-pilot drone operation. It is testing home deliveries in a rural area around Blacksburg, Virginia.

The FAA is writing rules for drone operations, including guidelines for sharing airspace with passenger planes and flying over populated areas.