In recent years, much of the commentary about climate change has gone from sternly serious to wildly despairing. A new report from the United Nation’s Intergovernmental Panel on Climate Change warns that the effects of climate change are accelerating and that the world has barely more than a decade to make deep cuts to greenhouse gas emissions and limit warming to 1.5 degrees Celsius by century’s end. Such reductions are extremely unlikely, given that global emissions rose this year and last. China, the world’s biggest emitter by far, is still building coal-fired power plants, while the U.S. under President Donald Trump has abdicated leadership on the climate issue. Warming of more than 1.5 degrees seems certain at this point and the world will have to deal with the consequences.

But how much, exactly, will Earth warm before the fossil-fuel era runs its course? That’s harder to forecast because it depends not just on climate science but also on assumptions about emissions. And that, in turn, depends on technology and economics, both of which are notoriously hard things to predict. The IPCC lays out several business-as-usual scenarios for how much greenhouse gas would be emitted without major policy action, but it doesn’t say which scenario it thinks is more likely. The direst of these, called RCP8.5, implies that the planet would warm by an average of 5 degrees Celsius (about 9 degrees Fahrenheit) by 2100 — an absolutely catastrophic, civilization-ending level of warming. It’s typically this doomsday scenario that motivates some observers to despair and others to call for reckless, flailing policies like the dismantling of capitalism.

But a growing chorus of climate scientists and energy policy analysts has begun to question whether the dreaded RCP8.5 scenario should be taken seriously. The scenario assumes that after a brief flirtation with natural gas and renewable energy, the world returns to fueling industrialization primarily with coal. But it seems vanishingly unlikely that the global coal industry will increase sevenfold, as RCP8.5 envisions, even if natural gas proves to be a temporary phenomenon. 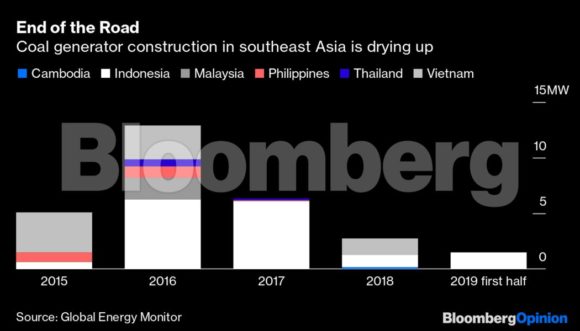 First of all, there probably just isn’t that much accessible coal in the ground. Second, burning coal creates air pollution in addition to greenhouse gases, which gives countries an additional incentive to reduce its use. Third, the price of renewables has dropped to the point where building new coal plants is simply not economical in most places. Despite China’s new plants, overall global coal use fell 3% in 2019. India is turning away from coal, and so is Southeast Asia:

Even Trump, despite his promise to restore the coal industry to its former glory, has managed to do nothing of the kind. 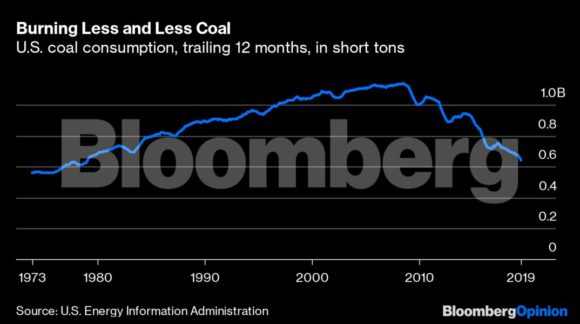 And as renewables get cheaper, it will become economical to retire existing coal and gas plants. McKinsey predicts that this will be the case in most of the world by 2030. Banks are already beginning to pull out of the coal-power industry, not because of environmental pressure (since they’re still funding coal for other industrial uses), but because they know there’s just no future in coal plants. Gas won’t be far behind, though a few gas plants will probably remain in service to back up solar plants when the sun isn’t shining.

So the IPCC’s commonly cited doomsday scenario looks like a rash flight of imagination. A group of climate scientists recently got together on Twitter and tried to figure out what a more realistic scenario looked like. They fed energy predictions from the International Energy Agency into climate models and found out that 3 degrees of warming is a much more likely business-as-usual scenario than 5 degrees. But as the climate scientists noted, the IEA has consistently underestimated the growth of solar power; each year the international agency predicts that growth in solar-power generation will slow, and each year it grows rapidly. If renewable technologies continue to surprise on the upside, warming could be limited to 2.5 degrees.

Now for the bad news: 2.5 degrees of warming will still be catastrophic for many people and countries, and 3 degrees even more so. Heat waves will become unbearable without air conditioning, even in high latitudes. All coral reefs will probably die. Many major cities will be drowned. Even just 2 degrees of warming, which will be exceeded in any business-as-usual scenario, will have very serious global repercussions.

That’s why a business-as-usual scenario is unacceptable. The human race probably isn’t doomed, but climate change is still an enormous catastrophe in the making. Big policy changes are needed — in the U.S., in China and in many other countries. Instead of embarking on the fool’s errand of trying to dismantle capitalism, governments should utilize the combined resources of the public and private sectors. They should retire all coal plants as quickly as possible, steadily reduce natural gas usage and convert to all electric vehicles. Buildings need to be retrofitted to use electricity instead of gas. And new technologies for producing low-carbon steel and cement, and for carbon-free aviation, need to be researched, scaled up and disseminated internationally.

More rational climate scenarios don’t give any excuse for complacency. But they do give human civilization a fighting chance.