Texas leads the nation in insurance claims for hail damage— far outdistancing other states with 23% of loss claims filed over the past three years. 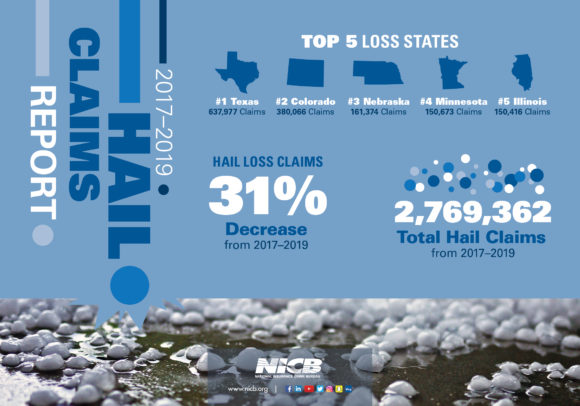 Of the five policy types providing hail loss coverage, Personal Property-Homeowners was the most affected with 1,711,094 claims or 62% of the three-year total. It was followed by Personal Auto with 734,985 claims and Personal Property – Farm with 153,737 claims.

According to the NICB, while annual hail damage is generally a function of severe storm frequency and location, what is more predictable is the appearance of unscrupulous contractors— “storm chasers”—who swoop in promising a quick repair. These unsolicited approaches are red flags as nearly all post-storm repair scams begin with an unsolicited visit to a victim by a repair person.

“NICB encourages policyholders to use caution when selecting a contractor or other workers to help repair your property or replace your windshield following a storm,” said Brooke Kelley, NICB vice president of communications.

She urges policyholders to always check first with their insurance company or agent before signing any documents presented by a contractor.