Suppose you’re working in an essential industry and your employer hasn’t provided you with adequate personal protective equipment. Maybe you say to yourself, “Okay, there’s a shortage, they’re trying.” Then you discover that just a couple of years ago, your employer had been warned that its supply of PPE was inadequate. Or maybe you find out that until recently, your employer’s supply of PPE was plentiful, but it’s all been sold off. You’d be furious. You might even decide to sue.

Unless, of course, your employer is a state agency. Then you’d be stuck. The doctrine of sovereign immunity would bar your lawsuit. Which provides more evidence, if any is needed, that the doctrine is in most instances a bad idea.

The reason we impose tort liability on private companies is to force them to take into account the costs their operations impose on others. If a company dumps pollution in the river, we sock it with damages to create an incentive for this company and others to be more careful next time. (The technical term for this is “mulcting,” a legal word I love.)

Governments, for the most part, face no such risk. When they mess up, they’re punished (if at all) at the ballot box. And yet there are plenty of situations when tort liability for state agencies could have made a difference in how much care was taken to avoid harm. Skeptical? Ask the people of Flint, Michigan, whose water supply wound up contaminated due to a series of decisions by state and local government. Ask anyone who lives near the Animas River in Colorado, accidentally polluted by the Environmental Protection Agency five years ago, after which the EPA refused to pay the cleanup costs, estimated in excess of $1 billion.

The Covid-19 pandemic supplies a fresh example. Suppose, for instance, that you’re an essential employee of the government of California but you lack sufficient PPE. During Governor Arnold Schwarzenegger’s administration, the Golden State decided to invest heavily in pandemic preparedness, including ventilators, protective equipment, and even mini-hospitals. The plan was abandoned by Schwarzenegger’s successor, who chose to invest in other priorities instead.

A private company would consider liability before taking so great a chance.

Government agencies at all levels had plenty of warning. There was, for instance, the detailed report on pandemic preparedness published by President George W. Bush’s administration — a report that urged specifically that private and public employers alike stockpile personal protective equipment. Prefer a more recent instance? Take a look at the 2019 review of New York State’s readiness to deal with a pandemic caused by a “novel” virus. This line jumps out: “The stockpiles for vaccines, personal protective equipment, supplies for diagnosis, and antiviral medications, need to be procured, maintained and packaged for distribution.”

A private company that failed to heed warnings would be facing lawsuits aplenty from its employees. A public agency, not having to worry about liability, is free to claim that it’s all somebody else’s fault. 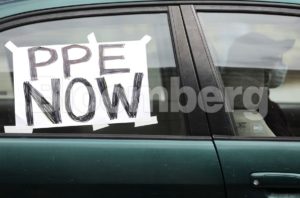 Remember how, early in the pandemic, ordinary citizens were urged not to purchase protective equipment so that there would be enough for first responders? Another way of looking at those desperate pleas is that public agencies — fire and police department, for example — had failed to secure an adequate supply. Rather than confess their own negligence, they sought to shift blame by creating an atmosphere in which people’s private decisions on how to protect themselves and their families would be viewed as selfish.

The Occupational Safety and Health Administration has received thousands of complaints against private employers (particularly in health care) said to be taking inadequate precautions against the spread of the novel coronavirus. But if you try to file a similar complaint against a state employer, you’ll be told that OSHA has no jurisdiction.

To be sure, one might reasonably argue that the imposition of liability would burden the ability of government at every level to weigh competing priorities and make choices. Maybe it’s not fair to blame them for choosing to fund other programs instead of securing more PPE.

One might also respond that despite repeated and recent warnings, nobody was ready for Covid-19. As Judge Richard Posner has argued, disasters become disasters precisely because it is not possible to prepare adequately for everything bad that might occur. It’s not reasonable, one could then conclude, to make state agencies liable for their failure to plan for so unlikely an event.

But the same points apply to private companies, which also must choose among competing priorities and also can’t possibly prepare for everything bad that might occur. If we wouldn’t be sympathetic to these defenses from a private employer, why should we accept them from a public one? To put the matter the other way around, why should we create an incentive for public employers to be less cautious than private ones?

As Justice David Souter pointed out two decades ago, the status of sovereign immunity as a matter of constitutional history might charitably be described as shaky. The doctrine is a holdover from the days when rule was by the Crown, and there’s a good case to be made that it’s inconsistent with principles of popular sovereignty and individual rights.

If the government were small, and the market provided many of the services now provided by the state, the claim that public institutions need special protection might have merit. Given the sprawl of government authority, however, there’s no reason that its agencies should be able to make decisions without regard to the costs they impose — particularly on their own employees. Among the many hard lessons of the present crisis is that absent the discipline of tort liability, state agencies will make lots of wrong choices.

Carter is a Bloomberg Opinion columnist. He is a professor of law at Yale University and was a clerk to U.S. Supreme Court Justice Thurgood Marshall. His novels include "The Emperor of Ocean Park" and "Back Channel," and his nonfiction includes "Civility" and "Integrity." More from Stephen L. Carter, Bloomberg Opinion