As the 2020 hurricane season gets underway, emergency officials pay attention to the growing share (29%) of the U.S. population in the nation’s 255 coastline counties.

They’re also looking at ways to minimize the impact of a hurricane on coastline businesses that employ local residents and serve an even larger share of the regional and state economy.

While the share of all businesses in coastline counties is similar to the share of the U.S. population living in these counties, the mix of business types doesn’t always mirror the population.

The share of businesses in some North American Industry Classification System (NAICS) sectors (including construction, retail trade, and finance and insurance) closely match the population share because local residents often are their biggest customers.

By comparison, the share of businesses in NAICS sectors such as agriculture, mining, and utilities is much lower than the population share because these industries depend on farmland, mineral-rich soil or fuel sources there but serve a wider customer base.

Not surprisingly, some sectors such as arts, entertainment, and recreation are even more heavily concentrated in these coastline counties because they cater to the local population as well as to tourists and visitors. 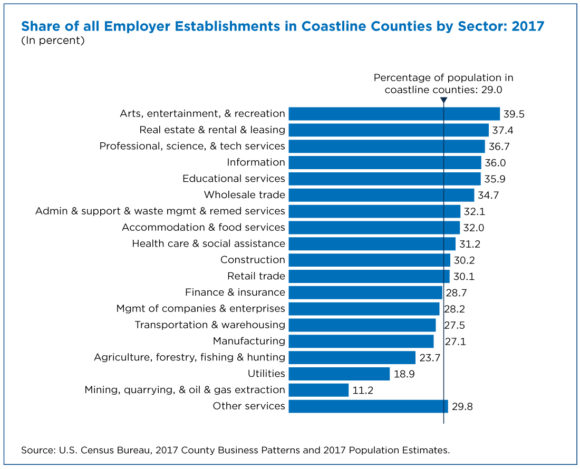 The way businesses are distributed in coastline areas gets even more interesting from state to state.

In the 23 states that include coastline counties, the share of jobs by industry varies widely: 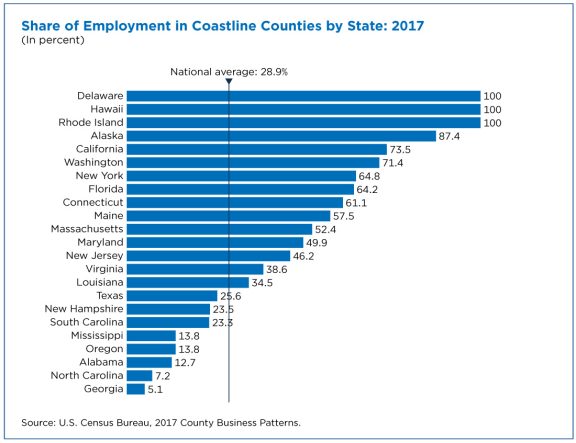 But the share of businesses by sector varies widely.

For some sectors (like manufacturing and management of companies and enterprises), the share of businesses in coastline counties is similar.

For others (like agriculture, forestry, fishing, and hunting), the shares are quite different. In Massachusetts, for example, fishing dominates this sector, while agriculture dominates it in Louisiana. 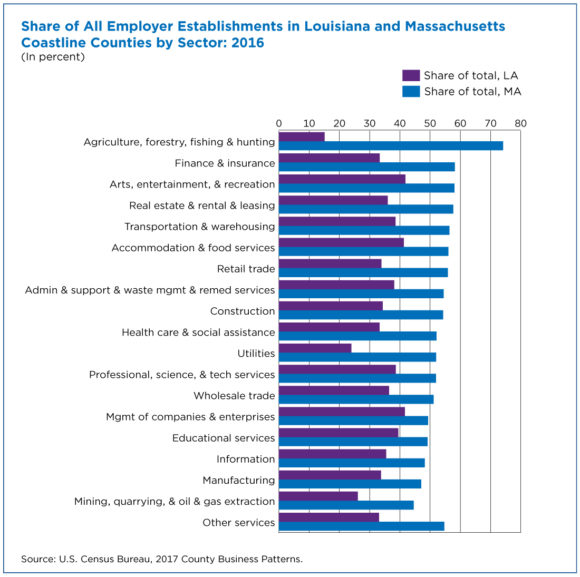 Researching both the demographic and business characteristics of areas affected by a coastal event can help emergency managers respond most effectively to disasters when they occur.

This information can also help them plan for potential events by conducting “what if?” exercises. Understanding the composition of businesses in these coastline counties that might need assistance during a disaster can help emergency managers prepare to respond and to help businesses reopen after an emergency has ended.

Census Bureau data and resources (including tools like OnTheMap for Emergency Management and Census Business Builder: Regional Analyst Edition) can help with this research.

Andy Hait is an economist at the U.S. Census Bureau.