The Insurance Institute for Business & Home Safety (IBHS) said its Suburban Wildfire Adaptation Roadmaps offer a detailed examination of wildfire vulnerabilities and specific solutions that can limit the catastrophic reach of wildfire as it approaches and moves through neighborhoods beyond the edges of the traditional wildland-urban interface (WUI).

IBHS is making an executive summary of the report available to the public.

When a single-family home is ignited by wildfire, there is a 90 percent chance it will result in a complete loss so it’s critical for homeowners to take action to reduce the risk of ignition, according to IBHS. The new roadmaps bring together findings published by the fire protection community and existing understanding of wildfire behavior with IBHS’s latest experimental and field research to guide homeowners through wildfire resistant choices for their home and property.

The roadmaps provide detailed strategies for specific features of homes in suburban neighborhoods – and set a clear starting point so the most critical areas can be addressed first. They enable individual homeowners to assess their wildfire vulnerabilities and relative property risk and lay out the path to reduce that risk.

“Suburban neighborhoods find themselves facing a wildfire threat previously reserved for residents in the wildland-urban interface,” said Roy Wright, president and CEO of IBHS, in prepared remarks. Wright, whose parents lost their Paradise, Calif. home in the 2018 Camp Fire, has a first-hand understanding of the urgent need for wildfire mitigation solutions developed specifically for suburban communities. “Yet, until recently, science had not caught up. When mitigation guidance doesn’t match the need, we run the risk of overwhelming homeowners with irrelevant information while steps that could make an impact are left undone.”

While mitigation recommendations for wildland-urban interface homeowners are widely available, Wright said few recommendations are tailored to homes in suburban communities. A “one-size-fits-all” approach to wildfire fails to address the intricate characteristics of these closely built neighborhoods, according to IBHS. For example, common wildfire guidance directs homeowners to create a five-foot noncombustible zone around their house and extend defensible space out to 30 or even 100 feet. However, in a suburban neighborhood this would reach well beyond the property line of a typical single-family dwelling. 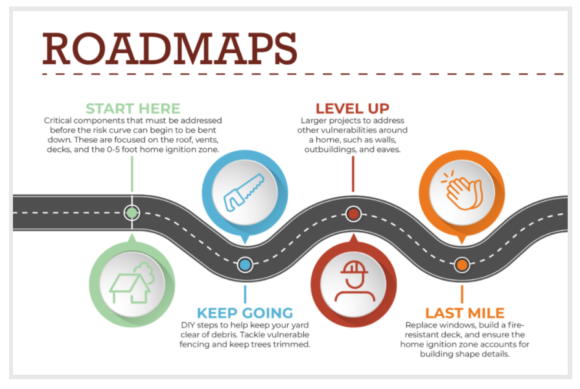 In the guidance offered by IBHS, each home is a system. One part of a house may be wildfire resistant, while another component remains vulnerable. Wildfire will find the weakest link so defending against it requires a multi-faceted approach to harden the home and surroundings with fire-resistant materials and reduce the intensity of a potential fire.

Some vulnerabilities can be mitigated with an afternoon’s work, while others require intentional community planning and design choices.

The roadmaps outline priority mitigation steps that must be addressed first. A group of required critical actions is fundamental to appreciably reduce wildfire risks. These critical actions are:

While a single action alone is not adequate, groups of actions coupled with ongoing maintenance work will drive down risk, IBHS says. Also, “meticulous maintenance throughout the year” is necessary for wildfire mitigation to be effective.

Once the critical actions have been taken, the roadmaps describe other areas of the structure, roof, and surrounding property to address, including eaves and fences. While nothing guarantees the survival of a home during a wildfire, reducing available fuels through defensible space in conjunction with hardening the structure with fire-resistant materials, together, can meaningfully address wildfire risks.

“Close attention must be given to the structure and the roof in addition to the surrounding property to address the home as a system in order to effectively reduce vulnerabilities,” explains Dr. Faraz Hedayati, an IBHS research engineer who specializes in wildfire research. “We’ve studied many of these aspects individually at the IBHS Research Center and in the field. The roadmaps bring years of research together with new insights to provide a comprehensive view of wildfire mitigation for suburban communities and to guide homeowners through the combinations of actions that will most effectively address their specific wildfire risk.”

The shape of a home matters; the spacing between homes matters; the maintenance of a neighbor’s home matters. Community planning at the county, city, and homeowners’ association level can help suburban communities overcome the unique challenges of closely spaced homes and adapt to wildfire.

“We have watched as too many communities were devastated by wildfire,” Wright adds. “Yet, individual residents cannot conquer this problem alone. Neighbors, communities, and city planners must come together united in addressing the wildfire threat.”

Dr. Steve Quarles, retired chief wildfire scientist at IBHS and a California resident, said he has seen a need for the roadmaps like these first hand.

“Living in a California community, I have been a part of discussions on how to generate neighborhood-wide interest in activities that can reduce the vulnerability of homes. Communities need both the research conducted at the IBHS Research Center and their interpretation in the form of public-facing guidance that provide a clear path forward to residents and community leaders so all can begin to take meaningful actions. Wildfire will always be with us as California residents; we can use the roadmaps to help us adapt and live with it,” Quarles said.

“This guidance from IBHS will be tremendously helpful to communities working to reduce their wildfire risks,” said Michele Steinberg, director of the Wildfire Division at the National Fire Protection Association (NFPA®). “The advice and priorities in the Roadmaps align with our outreach programs, including Firewise USA®, and serve as a call to action to communities at risk across the nation.”

“This roadmap synthesizes years of research to produce the first comprehensive set of science-backed recommendations to reduce wildfire losses in suburban communities,” added Dr. Michael J. Gollner, assistant professor of mechanical engineering at the University of California, Berkeley. “Devastating fire losses have dramatically increased in these communities over recent years. Most of these recommendations address existing homes where changes are the most challenging, but important to implement. The report clearly delineates must-change features on the home as well as the influence of surrounding structures and the entire community landscape on reducing fire risk. Recent fire reconstructions have shown us that neighboring homes and surrounding wildfire behavior play an outsized role on losses, so following this more holistic approach has the potential to dramatically reduce large wildfire losses over the coming years.”

IBHS’s Suburban Wildfire Adaptation Roadmaps will be part of a new Wildfire Ready guide for homeowners that will be released later this summer. It will detail projects homeowners can act on to adapt and reduce their wildfire risk.