For independent filmmakers, the Covid-19 pandemic has added a new hurdle to the already challenging task of lining up financing: finding insurance to cover virus-related interruptions.

Lenders are demanding it, and it’s tough to get. So tough, in fact, that independent films have been forced to shut down by the shifting demands of financiers worried that the virus will cause huge losses.

Business-interruption insurance used to be no problem for small filmmakers, but the coronavirus is new and difficult to assess. As a result, producers not working with big studios like Walt Disney Co. or Netflix Inc. are struggling to get projects off the ground. Before the pandemic hit, policies could cost $400,000 or more. Now they cover less and are difficult to obtain. 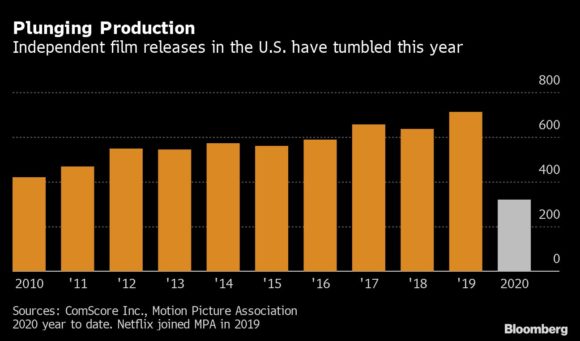 Virus concerns aren’t completely new. When SARS broke out in Asia in 2003, insurers responded by writing exclusions into many business-interruption policies. But film and TV were largely spared. Now, movie insurers are seeking to add those in, and that’s giving lenders pause, according to Aaron Baum, a vice president in insurance broker Marsh’s entertainment and media industry practice. His company is part of Marsh & McLennan Cos.

“Their financiers do not want to put up the money for the project if there are exclusions related to Covid-19 on the policies,” Baum said.

Producer-director Richard Gray found out as he was about to begin principal photography on “Murder at Emigrant Gulch,” the working title of a film about the 1882 murder of an immigrant after he strikes gold in Montana. Gray, who directed the 2020 indie release “Robert the Bruce,” has been working on the picture for three years. He, along with Carter Boehm and Colin Davis, used the state’s new tax credit to construct Yellowstone Film Ranch, a multimillion-dollar backlot depicting a western city about 45 minutes from the namesake national park.

When Covid hit, a senior lender’s demands changed from week to week, Gray said in an interview, and ultimately forced his crew of 110 to shut down just a week before shooting when they couldn’t obtain a completion bond that included virus coverage.

“Insurance for the first time ever is a focal point for the industry rather than an afterthought,” Comenos said.

“We’ve never seen anything like it,” the Australian native said by phone. “We’re always insured.”

Without a vaccine, Hollywood and insurance providers say government support is the only way to kickstart the industry. One proposal from U.S. Representative Carolyn Maloney, a Democrat from New York, would create a solution similar to the one set up for terrorism risk after the Sept. 11, 2001, attacks.

The Pandemic Risk Insurance Act would create a federal backstop for business-interruption policies that cover pandemics. While the bill hasn’t yet passed, Maloney is still pushing for the proposal.

“Losing insurance coverage has reduced our industry’s ability to work dramatically — affecting thousands of jobs across the country in virtually every state,” said Jean Prewitt, head of the Independent Film & Television Alliance, which is working with Maloney.

With many productions shut down to prevent the spread of Covid-19, the pandemic has affected all filmmakers. But large studios are able to absorb the added financial risk. Crockett Woodruff, a senior vice president at City National Bank in Los Angeles, said his firm has offered arrangements in which a large studio self-insures.

“As long as they have the financial wherewithal to do so, we would consider that,” Woodruff said, though the vast majority of filmmakers aren’t that well-off. Earlier this month, Lions Gate Entertainment Corp. dropped plans to produce “The Plane” with Gerard Butler because of insurance concerns, Deadline reported.

That gap left by insurers pulling back has created opportunities for companies such as SpottedRisk, an underwriter that partners with different carriers. The company evaluates safety precautions on sets as part of its underwriting models, according to Janet Comenos, co-founder and chief executive officer. But the coverage tends to be more expensive.

“Insurance for the first time ever is a focal point for the industry rather than an afterthought,” Comenos said.

Nicole Haggerty, SpottedRisk’s chief operations officer, said the company benefits from the fact that it wasn’t offering this coverage when Covid-19 first hit, meaning it’s not having to clean up prior losses. SpottedRisk dug even deeper into entertainment insurance with its acquisition this year of Media Guarantors, a managing general underwriter that focuses on completion bonds with capacity provided by Axa SA insurers.

Not surprisingly, some filmmakers and their insurers are now in court. Chubb Ltd. was sued by Hoosegow Productions Inc., the company behind the Ben Affleck thriller “Hypnotic,” for failing to renew an insurance policy that would continue allowing Covid-related interruptions. The case is set for trial in October 2021.

Chubb said in a statement that there’s “no contractual right” to extending a policy on the same terms as the original agreement.

“For more than 200 years, we have always strived to do the right thing, paying claims promptly and fairly,” the company said. “Any significant increase in risk, such as the Covid-19 pandemic, must be considered at the time of policy renewal.”

Filmmakers like Gray are working to rearrange financing and get shooting going. In some cases, they find others willing to accept the risk. Days after Lions Gate dropped “The Plane,” Solstice Studios picked it up. The company started two years ago with $400 million in capital, according to its website. But few companies like Solstice exist, and films that are in their early stages are less likely to be acquired.

The recent promise of vaccines has raised hopes that production could get back to normal soon. Calls about some insurance policies have slowed with vaccine developments, according to Marsh’s Baum.

“We’re not getting as many calls on these products because of the vaccine news,” Baum said. “People are taking kind of a wait-and-see approach.”