Neglected no more. Independent agents are feeling the love from property/casualty insurance carriers—and the scores they are giving carriers are moving higher, J.D. Power reports.

According to results of the J.D. Power 2021 U.S. Independent Agent Performance and Satisfaction Study, released on Oct. 5, agent satisfaction has reached an all-time high since 2018—with the overall satisfaction scores among personal lines and commercial lines agents jumping 54 points over the four-year period.

In a media statement, J.D. Power said that latest year-over-year gains in satisfaction with quoting, support and communications and servicing helped to drive up the overall scores. 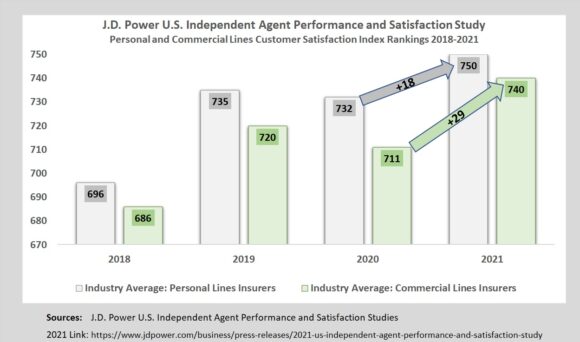 “During the past year, some of the industry’s most notable acquisitions and operating model investments have thrust the independent agent channel back to the forefront, resulting in improved agent-carrier relations,” said Tom Super, head of property and casualty insurance intelligence at J.D. Power, in a statement.

Compare that to what J.D. Power said back in 2019, when the firm headlined its media statement with the title, “Insurers Come Up Short for Independent Agents Despite Critical Role Agents Play in Driving Business,” and reported that overall independent agent satisfaction scores of 735 for personal lines insurers and 720 for commercial were “among the lowest overall satisfaction scores in any business study currently conducted by J.D. Power, lagging even financial advisors (737).”

The 2021 J.D. Power report is the second survey report in recent days reveal that carriers are paying attention to agents’ wants and needs. Late last week, Celent, a global research and tech advisory firm for financial institutions, offering results of a separate survey it conducted from a carrier perspective, reported that 94 percent of 35 North American carriers said they want to create above-average digital experiences for agents, with one-third of those aiming to be “world class.”

The Best and the Worst

Erie Insurance made its debut in the J.D. Power rankings from the survey this year, topping all other personal lines insurers with an overall satisfaction score of 857—more than 100 points above the average. 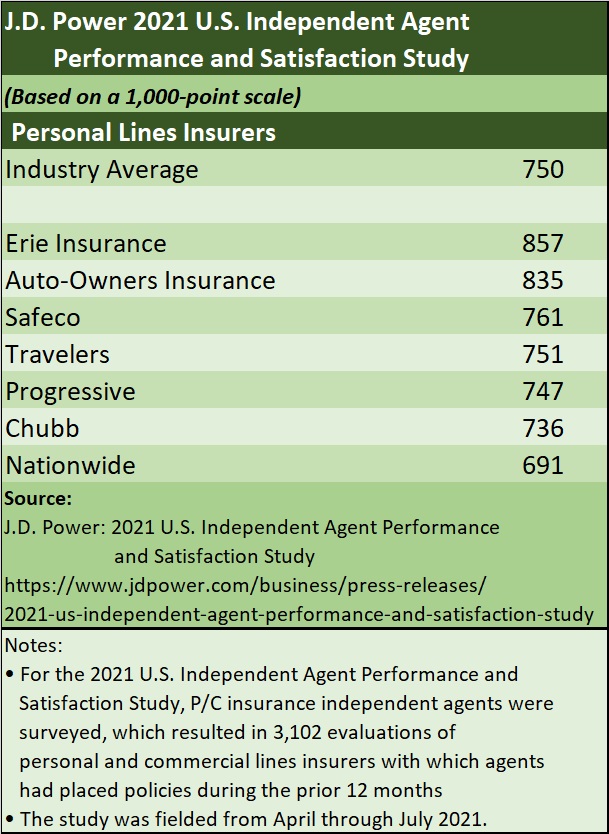 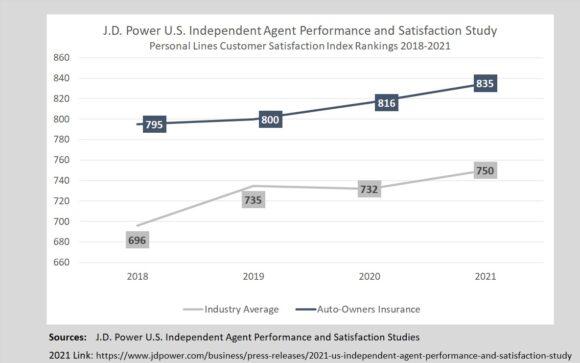 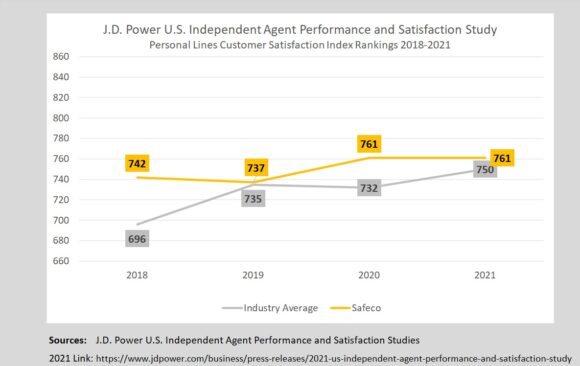 The most dramatic rise in agents’ personal lines satisfaction scores in the last year was recorded by Nationwide, with a 2021 score of 714 vs. 621 in 2020. Although the Columbus, Ohio-based carrier did not appear in the 2018 ranking, its scores have remained below the industry average for the last three years.

(Editor’s Note: J.D. Power didn’t award top rankings or publish scores for commercial lines insurers in 2020. For a segment to be award-eligible, at least four insurers must reach 100 or more completed surveys and have at least 67 percent market share, which did not happen in 2020, a J.D, Power representative. J.D. Power did, however, share the scores with Carrier Management, which are included in some of the charts accompanying this article.) 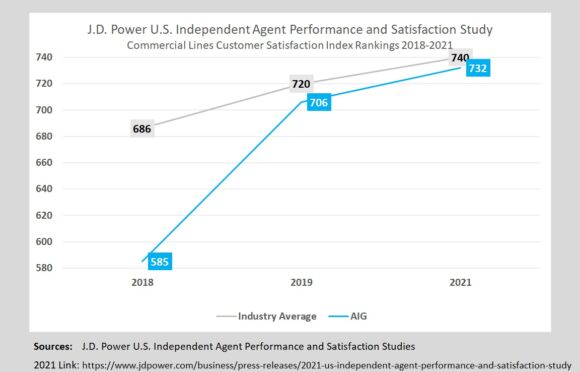 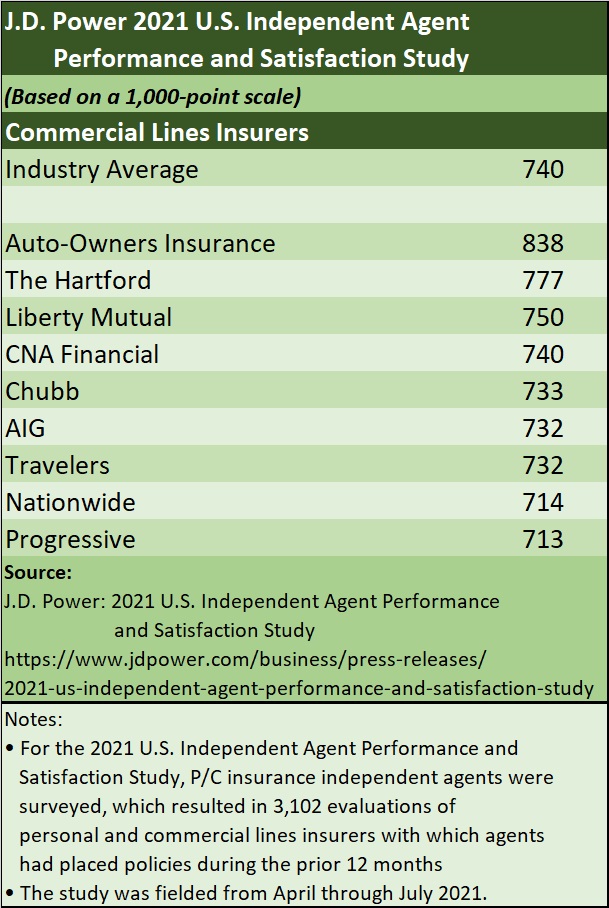 The Hartford, Liberty Mutual and AIG and Travelers are the only four commercial insurers ranked by J.D. Power in 2021 that were also ranked in each of the three prior years (with at least 100 surveys completed for the company).

While scores for The Hartford and Travelers have hovered near the industry average in prior years, The Hartford, edging up just a little bit higher in 2018 and 2019, and rising 45 points above Travelers in 2021, maintained its position in second place for all years except 2020. 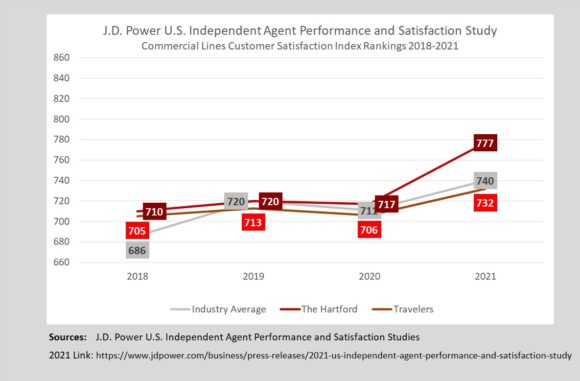 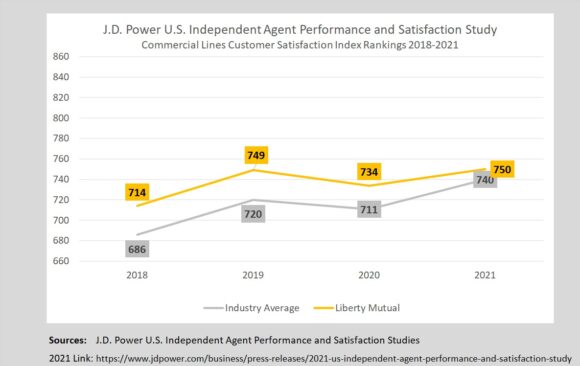 J.D. Power also summarized other industrywide findings about multiline agents, score differences among different agency sizes and agents’ use of carrier digital tools. Among other results

U.S. Property Insurers Could be Facing $12.5B in Hidden Cyber Losses

Brown & Brown Continues Its Rebranding With Focus on 130 Retail Locations