The United States will not be able to insure its way out of coming climate disasters, but must focus on mitigation and resiliency – along with insurer solvency — to reduce risk and exposure, insurance regulators said Wednesday.

Insurance commissioners from around the country joined a virtual meeting, dubbed, “How are U.S. insurance regulators taking action on climate change risks,” held as part of the United Nations’ Climate Change Conference, now under way in Scotland. The commissioners offered few tangible regulatory changes but said that a number of initiatives are under way at the national, state and local levels.

To that end, some insurance regulators are now working with state lawmakers and local officials to beef up building and zoning codes to discourage new structures in flood-prone areas and to retrofit existing homes, said Ray Farmer, insurance director for South Carolina.

Studies have shown that every $1 spent on mitigation produces a return of $11 in savings on recovery expenses, said Farmer, who is co-chair of the NAIC’s climate and resiliency task force. 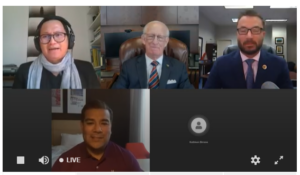 That being said, the commissioners also noted that the NAIC is exploring new model rules and insurance products that, if adopted by more states, could help ensure that insurance carriers are better able to manage catastrophes as the planet warms and storms intensify. One idea is the use of automated payments after a triggering event. Another is expanding the use of parametric insurance to fill coverage gaps. With parametric, insurers offer lower-priced policies that quickly pay a predetermined amount after a disaster.

“There are some regulatory concerns about how these products are designed and whether consumers fully understand how the coverage works,” Farmer said. But with the right structure and transparency, parametric can help policyholders recover more quickly from a disaster, he added.

The NAIC also is examining new ways to share and assess insurance carriers’ risk solvency across state lines. California’s insurance commissioner, Richard Lara, is in Glasgow, Scotland, for the UN conference. Via videoconference, he said Wednesday that most larger carriers are nationwide in coverage. Key data on 80% of the market can now be gleaned from examining insurers’ financial information in just a few states, Lara said. State regulators can study that to get a better idea of how carriers can weather coming disasters, he added.

Insurance companies also joined the discussion and urged regulators to streamline rules that may make it tricky for carriers to insure environmentally friendly property and systems.

“We never want to hear the words, ‘I wanted to make a change to move toward net-zero (emissions) but my insurance wouldn’t allow it, there was a blocker in the way,'” said Owen Morris, managing director of personal lines at Aviva, a Britain-based multinational insurance company.

Morris spoke at the Net Zero Insurance Alliance virtual meeting, held after the regulators’ conference Wednesday. Residential solar panels, for example, have run into some insurance and regulatory challenges, including in Florida.

“If someone wants to put solar panels on their roof, we need to support that,” Morris said.

“We need to make sure we are in the vanguard of these changes,” he added. “We will have significant needs and asks of government and regulators to try and assist us on making these changes.”

At the UN conference Wednesday, a coalition of the world’s largest insurers, banks and investment groups pledged to reach net-zero emissions across their portfolios, according to news reports. Environmental groups were skeptical, noting previous pledges that were not realized.

No, a Purchase Order Is Not Like Insurance, State High Court Says in Reversal