The NFL Players Association is asking player agents to warn clients that signing with the New Orleans Saints could subject them to unfavorable workers’ compensation benefits.

In an email Friday, NFLPA chief DeMaurice Smith said union officials believe agents should “consider the Saints’ efforts” to push for legislation that would substantially reduce benefits to players who are hurt outside the 17-week regular season, when player salaries are paid.

Players receive only per diems during offseason workouts and training camp. Under legislation which has passed the Louisiana House of Representatives and awaits consideration in the state Senate, workers compensation benefits could be based on per diems – rather than the full annual value of a contract – if injuries occurred in the offseason.

“We are actively involved in the effort to defeat this bill but we feel it is important for you to consider the Saints’ efforts given your representation of our players and the advice you would have to give to any free agent player considering an opportunity to play for the Saints,” Smith wrote. “Please advise your players of the potential consequences of the Saints’ efforts should they sign with the Saints.” 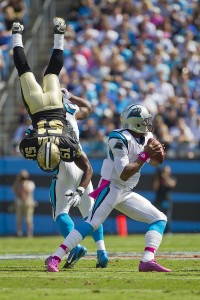 Bill supporters say it would ensure that athletes are under the same rules as other Louisiana employees, and they note that in six of seven past workers comp lawsuits between former Saints players and the team, state courts sided with the club on the issue addressed by the legislation.

“While the NFLPA has inappropriately and unprofessionally discouraged free agents from coming to Louisiana, they fail to mention that they have aggressively instigated legislative efforts in Louisiana since 2010 in an effort to undo the prevailing case law,” said Chris Kane, an attorney with the firm Adams and Reese, which represents the club. “Consequently, HB1069 is now being sought for passage to stop the needless litigation and annual lobbying efforts of the NFLPA to circumvent the established case law.”

Kane further noted that Louisiana workers’ comp law would remain generous relative to other states where NFL teams play, particularly as it relates to the length of time employers are required to provide wage-benefits _ up to 10 years – for non-permanent injuries.

Meanwhile, Saints quarterback Drew Brees has come out publicly against the measure his own team is backing.

“The job of legislators in Louisiana is to protect injured workers and fight for their workers comp benefits, not find ways to support bills like this one which reduce the workers comp benefits we receive when we get hurt. There is no financial benefit to the state with this bill, only team management,” Brees continued. “Whether we get hurt during the season or in the preseason, it is all the same. It is in preparation to help us win a championship for our community.”

Specifically, the legislation aims to calculate workers’ compensation benefits for pro athletes based only on recent earnings at the time of the injury. The NFL’s collective bargaining agreement has a formula that also includes future earnings and is aimed at ensuring that benefits are calculated on the full annual value of a player’s contract.

Broadwater has said the Saints asked for the bill, which aims to clarify in law that pro athletes cannot be exempt from a state formula that applies to every other Louisiana employee seeking workers compensation benefits after a workplace injury.

The NFLPA counters that athletes should not be punished with potentially reduced benefits simply because their salaries are not distributed evenly over a 52-week period.