Ten businesses in a Tulsa shopping district were so badly damaged by a weekend tornado that they have been condemned, including the TGI Fridays and Whataburger restaurants where several people were injured, city officials said .

Emergency Medical Services Authority spokeswoman Kelli Bruer said Sunday that the ambulance company transported 13 people to area hospitals, eight from the TGI Fridays restaurant, which lists its closing time as 1 a.m., four from a 24-hour Whataburger restaurant, and one person who was in the area. The National Weather Service said the tornado struck at 1:19 a.m.

One of the most severely injured was in TGI Fridays and the other was inside the Whataburger, Bruer said. 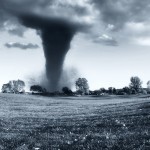 Allan Chaney, owner of Woodcraft, said the tornado toppled walls and destroyed some of the roof of the store specializing in woodworking tools and supplies.

“The tornado took out about a third of our store,” Chaney said. He said a cinder block wall at the rear of the store and two interior walls were knocked over.

“All of our inventory is knocked all over the place,” Chaney said. “We will hopefully be able to retrieve about 50 percent of it.”

Chaney said he hopes to be back in business by Nov. 1 to take advantage of the holiday shopping season.

“Woodworking is a winter sport,” he said. Three-fourths of the store’s sales occur in November, December, January and February.

No injuries were reported from the twisters outside Tulsa.

Officials said the tornado that struck Tulsa had wind speeds of 120-130 mph and also damaged power poles and trees. The other twisters had winds of 90-110 mph. The storm near Chelsea felled a number of trees.

St. Francis Hospital spokeswoman Lauren Landwerlin says about 30 people were treated at the hospital, including three in “non-critical” condition.

Tulsa Mayor G.T. Bynum toured the damaged area Monday and said the city was lucky that the storm hit a mostly commercial district when businesses were closed instead of centering on a residential area.

“The timing of it definitely helped, and we are very fortunate,” Bynum said.