Hurricane Harvey has set a U.S record, according to the National Weather Service, dumping 51.88 inches of rain in parts of Texas. As the tropical storm moves over southern Louisiana, claims catastrophe teams are moving in to devastated cities in Texas.

According to NOAA’s Storm Prediction Center, preliminary reports of 21 tornadoes were recorded in Texas from Friday night through Saturday, including one in Sienna Plantation early Saturday morning that ripped off roofs and caused severe tree damage.

In Corpus Christi, downed trees, debris and power lines blocked roadways, signs were blown down, and some roofs were at least partially torn off.

According to the Texas Department of Insurance, when a disaster is declared, Insurance Code §4101.002(b) and §4101.101 allows carriers to immediately use nonresident and emergency adjusters to handle claims.

By Monday, Allstate had tweeted one of its Mobile Claims Centers was staged in Austin, waiting for the all clear to deploy. 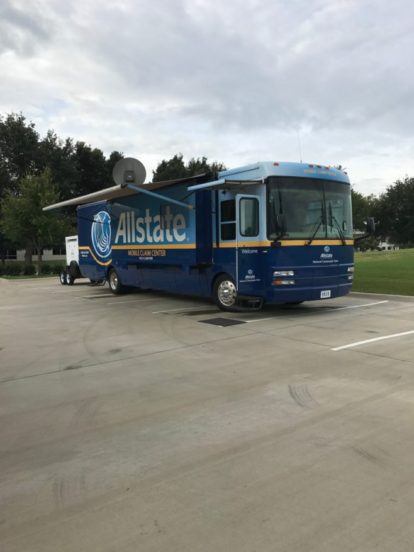 Farmers Insurance reported an estimated 500,000 policyholders – 400,000 homeowners and approximately 100,000 auto and business policies – in Harvey’s path. As of Tuesday afternoon, the insurer received more than 10,000 claims across all lines, nearly half are homeowners’ claims. Farmers sent 200 claims adjusters to the area, but noted more could be sent if needed. A mobile claim center was planned for set up in Victoria, Texas, this morning. Its mobile claim centers are equipped with WI-FI, satellite phones and water, along with other supplies.

In partnership with Kespry, Farmers will send in drones to assess hurricane damage. Just this month, Farmers announced a new microdrone fleet that will assist adjusters on residential roof damage claims in areas impacted by hailstorms and other severe weather events.

USAA reported its adjusters and cat response unit, Eagle 1, had moved into the Corpus Christi area late Monday. Eagle 1 is a large recreational vehicle that allows claims to be handled inside. In some cases, payments can be issued on the spot. The carrier was working with local authorities in Port Aransas and Rockport to begin working claims there.

As of Wednesday morning, State Farm had received an estimated 14,600 homeowners and 12,800 auto claims.

According to Travelers, preparation is key in gearing up for onsite cat claims handling. With a national catastrophe center located in Windsor, Conn., the insurer uses geospatial technology and advanced analytics to monitor storms and provide resources when necessary.

“About six days before it [Harvey] started that approach we got out the cat playbook and we started to plan for its eventual arrival on to the coast of Texas,” said Jim Wucherpfennig, vice president of Property at Travelers.

Prior to the storm making landfall, the insurer sent out 12,000 notifications to agents that included hurricane-prep tips, home inventory checklists and weather alert signups.

Wucherpfennig said pre-planning for Harvey included booking blocks of rooms in advance at hotels in Dallas and other cities close to the hurricane’s path. Resources were pre-packaged and a fuel truck was staged in Louisiana to ensure adjusters didn’t have to wait in long lines to gas up their vehicles.

The company has three large claim offices located in San Antonio, Houston and Dallas, with a combined 125 property adjusters and more than 300 auto adjusters. In addition, Travelers deployed 50 more adjusters to the Dallas office on Monday.

Two of the insurer’s catastrophe vans are stationed in Houston and another off the coast of Texas. Travelers has 300 property adjusters dedicated to handling cat losses and ready to be deployed. Wucherpfennig said the insurer was hoping they could be deployed to damaged areas sometime on Wednesday.

Many adjusters are drone-certified and have drones included in their equipment.

BoatUS could not comment on the impact to boats in the state, however, D. Scott Croft, vice president of public affairs, said Rockport and Port Aransas were hit the hardest by the hurricane.

Many locations were still in lockdown as of Monday morning, he said. The BoatUS catastrophe team is ready to assist policyholders once they gain access to the affected areas.

Also on Monday, AIR Worldwide updated its estimate of insured wind and storm surge losses resulting from Harvey, indicating a range of $1.2 to 2.3 billion. AIR reported that Harvey could make a second landfall near Houston later this week.

“We won’t know all the impacts for a long time and that’s got to be really stressful for business owners,” said Dalton.