Houston officials say they’re already thinking about how to build and fund projects that will lessen the blow of the next storm, even as the nation’s fourth-largest city continues to recover from Harvey’s devastating floodwaters.

Leaders with the U.S. Conference of Mayors gathered in Houston over the weekend to meet with Mayor Sylvester Turner. They discussed how Houston is working to rebuild and what other communities can learn from its experience.

Turner has said his top two priorities in Houston’s recovery are removing the 8 million cubic yards of debris that Harvey left behind and finding permanent housing for the hundreds of Houston-area residents who remain in shelters. Harvey made landfall as a Category 4 hurricane on Aug. 25 and dumped more than 50 inches of rain in some areas around the city after weakening to a tropical storm.

But Turner said Saturday that trying to move forward with various flood mitigation projects – such as widening some of the area’s bayous and building detention basins – will also be part of the recovery efforts.

“… People are wanting to know, `Do we rebuild where we are? Are things going to be different?”’ he said. “One thing we know is there will be another storm.” 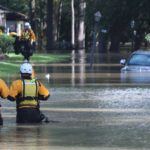 “Every one of these storms should force anybody who’s been a victim of them to rethink where they are, where they live and how they respond to natural disasters that continue to come and come with more frequency,” Landrieu said. “If you spend money on the front end on mitigation projects, you’ll save a lot of money and potential loss of life on the back end.”

In the Southeast Texas city of Beaumont, about 2,000 homes were flooded. But the city’s mayor, Becky Ames, said that figure would have likely been much higher if not for a $65 million drainage project that runs through the center of town. The project was one of several the city built after Hurricane Ike in 2008.

“All of those homes through that whole area would have flooded without a doubt before we did that project. I think that helped immensely,” Ames told The Associated Press in an interview on Thursday.

Landrieu said Houston continues to have New Orleans’ “undying gratitude” for helping shelter thousands of the Louisiana city’s residents who evacuated after Katrina.

“I just want the people of Houston to know, as hard as it is, it’s going to be OK. There is a pathway out of it,” Landrieu said.