08/22/2020 05:30 PM — Marco, one of two tropical storms headed for the U.S. Gulf Coast, was forecast to strengthen into a hurricane later on Saturday as coastal governors urged residents to prepare for the unprecedented weather event amid the COVID-19 pandemic.

Tropical Storm Marco, located about 50 miles (80 km) west of Cuba with winds of 65 mph, was expected to intensify as it moved through the Yucatan Channel into the southeastern Gulf of Mexico, according to the National Hurricane Center’s latest bulletin.

To the east, Tropical Storm Laura was packing 50 mph winds as it moved west at 18 mph about 100 miles west of Ponce, Puerto Rico, the center said. It is forecast to hit the U.S. Gulf Coast on Wednesday, NHC projections show.

On Saturday morning, Mississippi Governor Tate Reeves declared a state of emergency, urging residents to make preparations, given the unpredictability of the storms and the limited amount of available shelter space due to social distancing requirements caused by the pandemic. 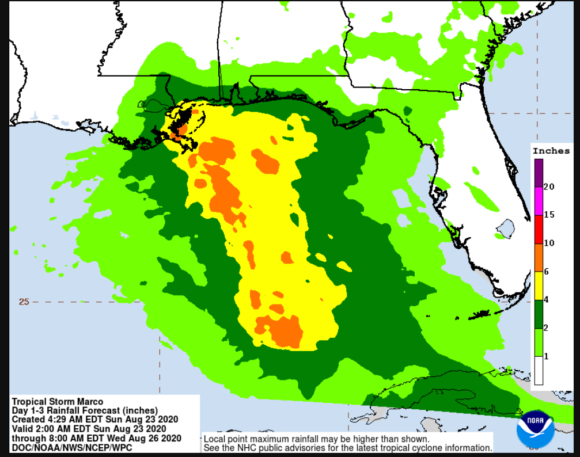 “Should you need to get out … you need to make plans early to do so,” he said. “We cannot have … a mad rush of people into our shelters. We want to put you on alert.”

Puerto Rico Governor Wanda Vazquez also issued a state of emergency and warned residents to remain indoors as Laura was lashing the island with rain and high winds on Saturday.

“Do not cross flooded areas, do not expose your life. Stay away from rivers and streams,” she warned Puerto Ricans on Twitter.

Tropical storm conditions from Laura were expected to also strike the Virgin Islands on Saturday and the Dominican Republic and Haiti on Sunday while Marco is forecast to thrash northwestern Yucatan Peninsula and western Cuba on Saturday.

Louisiana Governor John Bel Edwards also declared a state of emergency on Friday night for the state that is forecast to be drenched next week by both storms. He encouraged residents to put together emergency kits that include face masks and hand sanitizer to stay protected against the COVID-19 virus.

“Everybody in coastal Louisiana needs to be paying attention to these storms,” he said. 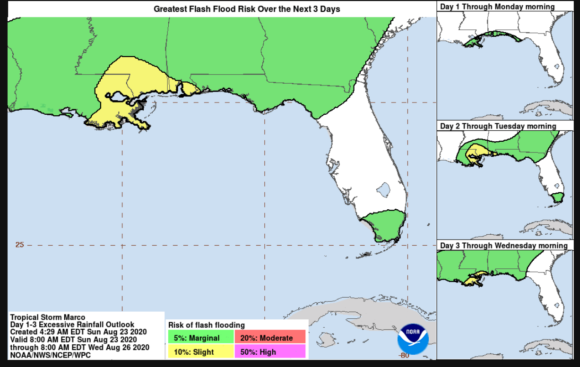 Tropical Storm Laura prompted the Dominican Republic to put 14 northern and eastern provinces on high alert as meteorologists warned of 4-8 inches of rain possible along with high waves and surges in river levels. The government also closed beaches and ordered a halt to aquatic sports and leisure activities in the mountains.

Cuba braced for possible hits from both storms, putting its eastern provinces on alert and warning of intense rain and winds due to Laura that could bring flooding, especially in the coastal city of Baracoa.

The Cuban government also put southern and western provinces of the Isle of Youth and Pinar del Rio on alert due to the risks of worsening weather from Marco.

(Reporting by Brendan O’Brien in Chicago and Erwin Seba in Houston; Additional reporting by Sarah Marsh in Havana; Editing by Andrea Ricci and Aurora Ellis)