Louisiana has declared a state of emergency in preparation for what the National Hurricane Center warns could be a major hurricane. Florida, Mississippi and Alabama are also being warned to prepare for heavy rains and flooding.

Ida is moving toward the northwest near 15 mph, a motion that is expected to continue over the next few days, according to an update from the National Hurricane Center at 2 p.m. EST.

The center of Ida is expected to move over the southeastern and central Gulf of Mexico tonight and Saturday, and Ida is forecast to make landfall along the U.S. northern Gulf coast within the hurricane watch area on Sunday, according to the update.

The most recent update issued at 5 p.m. EST on Friday and it calls for a storm surge warning from east of Rockefeller Wildlife Refuge in Louisiana to the Mississippi/Alabama border.

“The combination of a dangerous storm surge and the tide will cause normally dry areas near the coast to be flooded by rising waters moving inland from the shoreline,” the update states. “The water could reach the following heights above ground somewhere in the indicated areas if the peak surge occurs at the time of high tide.”

The reported maximum sustained winds are near 75 mph with higher gusts, and Ida is expected to be a major hurricane when it approaches the northern Gulf coast.

A Tweet from the @CityOfNOLA sent at noon CDT notified of “a mandatory evacuation for areas outside the levees (red) and a voluntary evacuation for the rest of the parish (yellow). #Ida could bring up to 11ft surge outside levees, and dangerous winds & heavy rain for the full area.”

There is an increasing risk of dangerous hurricane-force winds beginning Sunday along the portions of the coasts of Louisiana and Mississippi, including metropolitan New Orleans, where a Hurricane Watch is in effect.

Ida on the Move: At 800 a.m. EDT, the National Hurricane Center reported that the center of Tropical Storm Ida was located on Grand Cayman, moving toward the northwest near 15 mph (24 km/h) and this general motion should continue over the next few days. On the forecast track, the center of Ida will move away from the Cayman Islands this morning, pass near or over the Isle of Youth and western Cuba later today, and move over the southeastern and central Gulf of Mexico tonight and Saturday. The system is forecast to approach the U.S. northern Gulf coast on Sunday.

The insured losses for this storm will mostly depend on the storm track, according to a commentary issued Friday afternoon by catastrophe modeler Karen Clark & Co.

“The closer the track is—or more specifically the closer the strongest winds on the right of the track are—to New Orleans, the higher the losses will be,” the commentary states. “A shift in the track of just 20 miles will make $$ billions difference in the property damage and losses.”

Relative to the 2020 landfalling hurricanes impacting Louisiana, Ida is currently projected to bring the highest winds to New Orleans, and while storm surge will likely not approach that of Katrina, Ida is still a major hurricane that will cause significant storm surge along the coast, according to the commentary.

Ida is the ninth named storm of the current Atlantic hurricane season.

After landfall, Ida should weaken as it moves through the lower Mississippi and Tennessee River valleys. Forecasters are warning that of an increasing risk of life-threatening storm surge inundation along the coasts of Louisiana, Mississippi, and Alabama, where a Storm Surge Watch is in effect.

Ida is expected to produce heavy rains across the central Gulf Coast from southeast Louisiana to coastal Mississippi, Alabama, as well as the Lower Mississippi Valley starting Sunday into Monday, resulting in considerable flash, urban, small stream, and riverine flooding.

The Hurricane Watch is in effect for Cameron, Louisiana to the Mississippi/Alabama border as well as Lake Pontchartrain, Lake Maurepas, and Metropolitan New Orleans.

The Tropical Storm Watch is in effect for Mississippi/Alabama border to the Alabama/Florida border.

“Now is the time for people to finalize their emergency game plan, which should take into account the ongoing COVID-19 pandemic,” Louisiana Gov. John Bel Edwards said. “This type of threat contains additional problems because the window to prepare is so short. By Saturday evening, everyone should be in the location where they intend to ride out the storm.”

He warned of potential major power outages and limited travel.

Reuters reported that energy companies have begun airlifting workers from Gulf of Mexico oil platforms and moved vessels in anticipation of the storm. 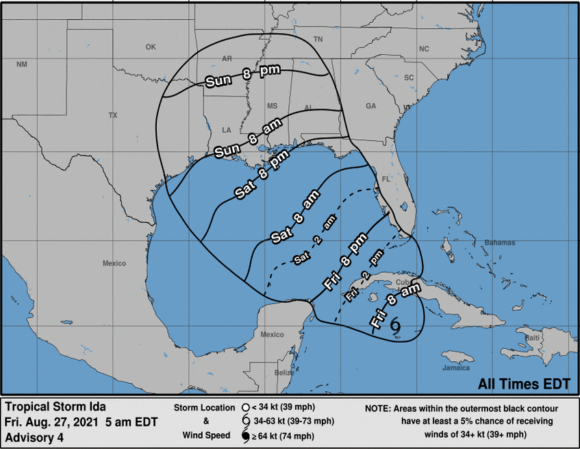