With two Florida landfalls in the same day, Hurricane Irma‘s destructive wind and flood damage could cost up to $65 billion for both insured and uninsured losses, according to a recent estimate by CoreLogic.

80 percent of the flood damage is uninsured, the company said.

Reported insured flood loss for commercial properties could top out at $8 billion.

Downed trees, signs and utility poles and flooded or debris-strewn streets could be seen in the southern regions of the state, AIR Worldwide reported.

Karen Clark & Company estimated losses in the U.S and Caribbean at $25 billion. Of the $18 billion insured loss in the U.S., the majority is in Florida, followed by Georgia, South Carolina and Alabama, KCC reported.

As of Thursday, Sept. 21, the Florida Office of Insurance Regulation reported more than 397,000 residential property claims and just over 17,000 commercial property claims had been filed. Including all types of losses, total estimated insured losses thus far had passed the $3 billion mark. OIR has been updating claims data daily. 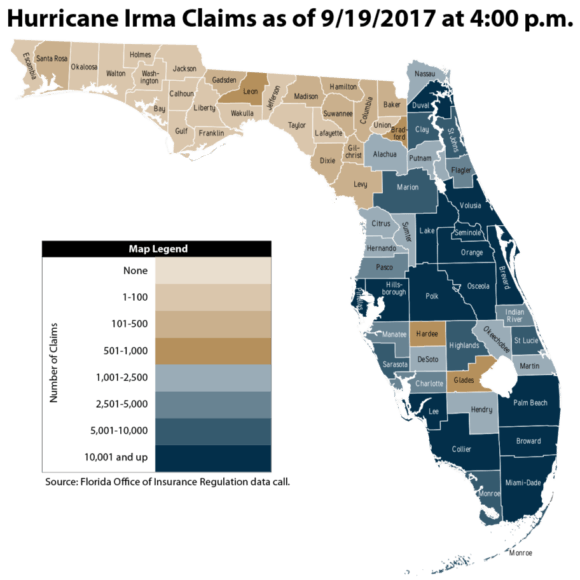 In response to the storm, Universal Property & Casualty Insurance Company reported it has more than $300 million in surplus, as well as a catastrophe reinsurance program that provides $2.65 billion in coverage to cover an event like Hurricane Irma. The insurer stated its projected losses from the hurricane are considerably lower than the limits of its catastrophe reinsurance program. UPCIC has not reported on the claims it has received to date.

As of September 18, Tower Hill reported receiving 20,000 claims resulting from Irma. The company has 300 catastrophe adjusters stationed in Florida. The insurer commented that many of its customers reported light to moderate damage, with most claims not requiring a visit from an adjuster before settlement.

Texas-based Interstate Restoration, a disaster restoration firm, reported it had 90 employees stationed in Florida prior to the storm, with another 60 new hires ready to go.

“Those challenges include lodging, power outages and scarcity of fuel,” said Mazur.

An additional 500 subcontractors in the southeast U.S. will join the Florida crew, he said.

This story has been updated from an earlier version that first appeared on Insurance Journal’s sister site, ClaimsJournal.com, on Sept. 21.