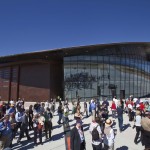 The new law exempts spacecraft parts suppliers from liability lawsuits by passengers. Lawmakers had previously exempted spacecraft operators from liability, but some space companies began passing up the New Mexico spaceport in favor of states that had extended those protections to suppliers.

Martinez said in a statement after a signing ceremony at the nearly complete $209 million project in southern New Mexico that her administration was “not only reaffirming the major commitment New Mexicans have made to Spaceport America but we now have an even stronger opportunity to grow the number of commercial space jobs at the spaceport and across our state. This legislation will prevent lawsuit abuse and make it easier for businesses related to the space travel industry to thrive and succeed right here in New Mexico.”

Virgin Galactic and Spaceport America officials have been fighting for years to get the legislation enacted, saying commercial space companies have passed over New Mexico in favor of states with more lenient liability exemptions.

Virgin Galactic had hinted last year it might abandon plans to launch its $200,000 per-person space flights from New Mexico if the bill failed again this year.

In January, Virgin began paying its $1 million-a-year rent. But it told the state it was doing so only under protest and without making a commitment to some of the other provisions of its long-term lease. Virgin Galactic President and CEO George Whitesides last month said the company and the state still had a “laundry list” of issues to resolve.

Texas, Florida and Colorado are among several states developing spaceports. Most are revamping old airports or other facilities, but New Mexico’s is unique because it is the first to be built from scratch.

Spaceport Executive Director Christine Anderson said Tuesday that she hoped the new law, as well as commercial tax breaks passed as part of a last-minute deal between the Legislature and Martinez, will strengthen her recruitment efforts.

“With this protection enacted, NMSA is now ready and able to get back to the business of building the commercial space industry here in New Mexico,” Anderson said in a statement issued by Martinez’s office.