A potash mining company won its lawsuit against an oil and gas company over a mistake in a New Mexico drilling project but a jury awarded just one cent of damages.

The award for Plymouth, Mass.-based Mosaic Co. in its suit against Oklahoma City-based Devon Energy Corp. was made last week in state District Court in Carlsbad.

The Carlsbad Current-Argus reported that lawyers for the companies declined to comment on the jury’s decision as they left the courthouse. 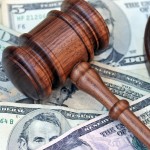 Mosaic’s 2010 lawsuit alleged that Devon drilled in an area where a federal review found that drilling would interfere with Mosaic’s potash mining. Mosaic claimed that Devon’s misplaced drilling had caused substantial damages,

The jury ruled that Devon’s drilling was negligent but the jurors only awarded the one cent of damages.