Arizona and Montana stand out as the only states without some form of texting and driving law, but some studies show there’s no evidence that laws intended to curb cellphone use behind the wheel reduce crashes.

“Taken altogether there’s some form of texting ban in almost all the states and the district, so that leaves Arizona and Montana,” said Russ Rader, senior vice president of communications for the Insurance Institute for Highway Safety. “Unfortunately we have found that there’s no evidence that various kinds of cellphone restrictions have reduced crashes.”

He explained what he referred to as a “confusing conundrum.”

“The laws do appear to reduce cellphone use and texting behind the wheel, however there’s no evidence that the laws have reduced crashes,” Rader said.

He acknowledged that it’s a surprising result, but it’s been known for some time.

The institute did two studies, one of which examined the effects on insurance claims for collisions in states that enacted handheld cellphone bans, and a second study looks at collision claims frequency in states that enacted texting bans compared with states that didn’t. That latest study was conducted in 2010 and since IIHS has continuously monitored claims data for changes. It’s still the same, according to Rader.

“There’s no effect on crash risk,” he said.

Why isn’t the crash risk going down with an increase in texting and cellphone laws? 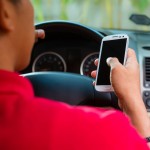 Part of the reason may be that the distracted driving problem is much larger than just cellphone use behind the wheel, therefore focusing crash prevention efforts on one aspect of a larger issue isn’t having a significant impact.

“Drivers do a lot of other things beside using cellphones that distract them and cause crashes,” Rader said.

Eating. Spilling coffee. Yelling at the kids. Reading the paper. Grooming. It appears the old school diversions were either replaced by cellphone activities, or they became a part of the whole extracurricular driving routine.

“There’s no question that distracted driving is huge, but studies found that it was huge before we all had cellphones,” Rader said.

According to IIHS, nine out of ten crashes are due to drivers making mistakes.

“And a lot of that is due to drivers not paying attention,” Rader added.

According to 2012 statistics from the National Highway Traffic Safety Administration, driver distraction was a factor in 3,328 deaths, which represented 9 percent increase from 2011.

A clear lack of evidence that texting laws prevent crashes hasn’t stopped states from banning the practice – except for Montana and Arizona.

But that’s not to say lawmakers in those states have been outright opposed to banning texting while driving. Various laws and proposals have been shot down for myriad reasons, and there are plenty of powerful voices in both states behind preventing drivers from looking down at their cellphones.

Montana Insurance Commissioner Monica Lindeen is one of them, and her office issued a statement on her behalf in reply to a request for comment on this story:

“We should ban texting while driving, it’s a no brainer.”

In Arizona several municipalities have considered or passed texting bans. Phoenix and a few other cities have imposed bans, and the state’s other big cities like Tucson and Flagstaff are taking up ordinances to ban texting while driving.

Texas A&M professors examined fatal crashes between 2000 and 2010 in 48 states without texting bans using data from the Fatality Analysis Reporting System and issued a study earlier this month showing that strict laws banning texting behind the wheel prevent nearly 20 deaths per year.

University of Alabama at Birmingham researchers earlier this year in a study from 2000 to 2010 found that laws allowing police officers to pull over all drivers who are texting resulted in a 5 percent reduction in the incidence of fatal accidents among people ages 15-21. However no type of anti-texting law reduced fatality rates for individuals above age 21.

There are plenty of lobbying groups armed with this sort of information that are pushing for stronger texting while driving laws in all of the states.

“Texting while driving is just plain dangerous,” said Nicole Mahrt Ganley, a spokeswoman for the Property Casualty Insurers Association of America. “All distracted driving is dangerous from eating and drinking, fussing with pets, putting on makeup, talking on the phone, etc. We need to turn the clock back and making driving the priority, not operating a mobile office or communications center.”