Farmers in pockets of California hardest hit by the drought could begin to see their wells run dry a year from now if rain and snow remain scarce in the agriculturally rich state, according to a study released Tuesday.

Farmers are accustomed to having a seeming endless supply, Howitt said.

“My message to farmers is treat groundwater like you treat your retirement account,” Howitt said in an interview. “Know how much water’s in it and how fast it’s being used.”

The study released by the University of California, Davis, Center for Watershed Sciences, used computer modeling, NASA satellite data and estimates provided by state and federal water agencies to examine the impact on California if the next two years continue to be abnormally dry. 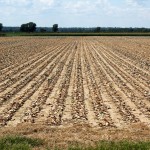 California leads the nation in production of more than a dozen crops, including almonds, artichokes, grapes and peaches. Howitt and his colleagues were invited to present the research at the National Press Club in Washington, D.C.

Updating preliminary findings released in May, the study estimates that this year farmers will leave nearly 430,000 acres unplanted, or 5 percent of total irrigated cropland, costing California $2.2 billion. More than 17,000 people will be without jobs, the study says.

With less water available in the mountain snowpack that fills the state’s reservoirs and canals, farmers are pumping more groundwater, and it’s not being replenished. California is the only western state that doesn’t measure groundwater use, and Howitt said demanding more of wells is a short-term solution with long-term costs.

“It’s very simple economics, but it’s such an emotional topic,” Howitt said. “Farmers have to sit down and ask themselves… do they want their children and grandchildren to be farming?”

The California Department of Food and Agriculture requested the research.

Karen Ross, the department’s secretary, said she recognizes the critical state of California’s ground water and the need for local officials to manage it. If that does not happen, Ross said the state will intervene. Millions of Californians depend on ground supplies for drinking water, she said, adding that farmers have a large role to play.