A private drone trying to record footage of a Northern California wildfire nearly hindered efforts to attack the flames from the air, but firefighters made enough progress to allow most of the 1,200 people under evacuation orders to return home Monday.

An unmanned aircraft that aimed to get video of the blaze burning near vineyards in the Sierra Nevada foothills east of Sacramento was sighted Sunday, two days after the fire broke out, California Department of Forestry and Fire Protection spokeswoman Lynne Tolmachoff said.

Authorities told the man controlling the drone to stop it from flying because of the potential danger to firefighting planes. The man, whom Tolmachoff did not identify, was not cited. 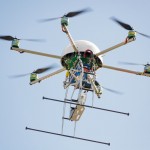 “This is the first one that I’m aware of,” she said. “These unmanned aircraft are becoming very popular with people, and there’s a possibility we will see more of them.”

Firefighters have responded to more than 3,600 fires so far this year, about 1,000 more than the average of the previous five years, Tolmachoff said. The fires have burned nearly 63 square miles. With several months still remaining in the fire season, more big blazes are expected.