The southwest Washington city of Longview tallied the damage Friday from a rare tornado that tore off roofs, broke windows and uprooted trees, leaving residents and officials in disbelief.

No one was injured in the Thursday afternoon wind blast, which covered 1.3 miles and unleashed winds as high as 110 mph, the National Weather Service said.

“I kind of furrowed my brow, probably, and said, ‘What?”‘ he told KATU-TV of Portland. 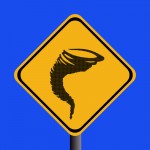 Tornadoes are rare in Washington state and the Pacific Northwest, where the nearby Pacific Ocean generally prevents severe temperature changes. But another one hit southwest Washington in 1972 and caused damage in Vancouver, Washington, just across the Columbia River from Portland, Oregon.

The Rev. Eric Atcheson said he saw the funnel cloud form and touch down near his church. He barely made it inside before the wind tore through an alley between two church buildings.

“There is a preschool in the building, so I was able to make sure all our kids and teachers are safe,” he said.

The church didn’t sustain any damage, but several trees were knocked down, he said.

Roofs were torn off an assisted living building and a towing company structure, the Daily News of Longview reported. Crews quickly started cleaning up under sunny skies that followed the tornado.

At Manchester Brothers appliance and sporting goods store, a large piece of roof from another building crashed through a store window and pushed a row of refrigerators about a foot from where they had been sitting.

After the roof section blew through, “it was just absolutely howling. It was deafening,” Ian McNew told KATU-TV. “That’s when we took cover.”

No one in the store was hurt.

Andy Bernard took a break from carving pumpkins at his home to see what was making so much noise. That’s when the tornado lifted his outdoor trampoline.

“It decided to take flight right at me, and I ducked and the trampoline went into the house, and it sucked it back out and up and over the roof and the garage and down three-quarters of the block,” he told KGW-TV.