Salt Lake City tourism officials and a Colorado ski resort have settled a legal fight over a marketing slogan targeted to tourists in the lucrative winter sports industry.

Utah marketers dropped “USA” from their new Ski City advertising campaign a month after Steamboat Ski Resort sued over its decades-old trademark on the nickname Ski Town, U.S.A., for Steamboat Springs, Colorado. Utah replaced the letters on a logo with red and white stripes.

The campaign has also removed the online tagline, “Once you’ve stayed in Ski City, you’ll never stay in another ski town.”

Both parties declined to say whether any money changed hands in the settlement announced Friday, less than two weeks before the ski season typically begins. 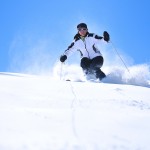 The Colorado resort sued in October, claiming Utah’s $1.8 million campaign violated its trademark and demanding any profit Salt Lake City made from the ads. The campaign was designed to lure skiers away from Colorado and other destinations with the Salt Lake City area’s dining and nightlife a short drive from major resorts.

A Steamboat Ski Resort spokesman said the settlement was amicable but shows the resort’s vigorous efforts to protect its trademark.

Scott Beck, president of the nonprofit group that created the Utah campaign, said Friday that the group will continue to market Salt Lake’s urban perks to winter sports enthusiasts.

“That’s a very different dynamic than what you’d consider a traditional ski town experience to be,” said Beck, president of Visit Salt Lake.

Last season, Utah had 4.1 million day visits from skiers and snowboarders, compared with 12.6 million in Colorado.